By early morning, 28th March 2022, villages of Ndiza, Tshanzu and Runyoni were being occupied by M23 and their backers, RDF. The fighting which is still continuing up to now is intense and close battlefield engagement.

The intense fighting has caused locals to flee particularly towards DRC – Uganda border of Bunagana. 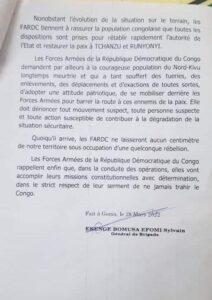 Previous Operation Shujaa Commanders Preside Over The Ground Breaking Ceremony For The Construction Of Kasindi-Beni-Butembo Road
Next AT THE REQUEST OF PRESIDENT FELIX TSHISEKEDI, THE UPDF STOPS RDF – M23 REBEL MOVEMENT FROM CAPTURING BUNAGANA BORDER TOWN, DR CONGO SIDE, AS FARDC MELTS AWAY