Kamerhe, President Tshisekedi’s chief of staff, is accused of embezzlement of more than $50m of public funds.

Prosecutors in the Democratic Republic of the Congo (DRC) are seeking a 20-year prison sentence for Vital Kamerhe, President Felix Tshisekedi’s chief of staff, for his alleged role in the embezzlement of more than $50m of public funds.

The prosecution on Thursday also asked the 61-year-old to be disqualified from holding public office for 10 years after completing his sentence, and has requested the seizure of his wife’s assets as well as those of other family members.

Kamerhe is the most powerful politician to face corruption charges in the DRC. He denies any wrongdoing. 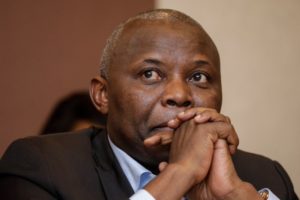 The veteran political figure reportedly made a pact to back Tshisekedi in a 2018 election in the expectation of succeeding him. His supporters say the case is politically motivated, aimed at blocking his chances of challenging Tshisekedi at the next election in 2023.

Kamerhe, who has been detained since April 8, and two co-defendants are accused of embezzling state funds intended to finance major public works.

A 20-year prison sentence was also sought against one of Kamerhe’s co-accused, Lebanese contractor Jammal Samih, 78, who would be deported at the end of his sentence.

The prosecutor’s office, which took nearly two hours to present its case, upheld a money laundering charge against both defendants and requested an additional sentence for “aggravated corruption”.

However, the office added that the total prison term should not exceed 20 years.

Prosecutors said Kamerhe and his wife, who married in February 2019, had acquired and renovated a mansion in France for more than one million euros ($1.1m).

Kamerhe’s Paris-based lawyers said the sentence request was unconstitutional and announced that they had referred the matter to the United Nations’s Working Group on Arbitrary Detention.

“The proceedings mention the embezzlement of public money. But there is no evidence of any illicit financial flows,” Jean-Marie Kabengela and Pierre-Olivier Sur wrote in a statement.

The two lawyers also said Kamerhe’s safety was in danger in the jail where he was being held, following rumours he was responsible for the sudden death of the trial’s presiding judge last month.

Police said Judge Raphael Yanyi died from a heart attack, and the results of an autopsy are still pending.

He claimed that nothing was done “without the knowledge” of Tshisekedi and insisted he was not in office when the contract at the centre of the allegations was signed in 2018.

A government adviser called by the prosecution during the hearing slammed Kamerhe’s comments as an insult to the president. The date of the verdict is not yet known.

Previous WHISPERS IN THE CORRIDORS OF RWANDA’S DIRECTORATE OF MILITARY INTELLIGENCE – DEATH OF MUTAMA PETER NKURUNZIZA.
Next RWANDA: IN A COUNTER TERRORISM AND CRIME INTELLIGENCE MEETING, STATE OPERATIVES DECIDES ON WAYS TO CONFISCATE OR SNATCH MOBILE PHONE HANDSETS FROM TARGETED INDIVIDUALS.