Like all data from the potato enclave(Rwanda), the satanic regime is well known for manipulating and doctoring data. And the Covid 19 data information won’t be different, it will be manipulated and doctored by a brutal regime that is known for high end Public Relation lies and fabrications.

According to sources from health officials more than 600 people are already infected with the deadly disease – COVID19, but the brutal authoritarian regime is concealing the true figures of those infected.

The 1st individual who was announced on 3rd March 2020, was first announced by the Dutch embassy in Kigali, only for the satanic regime to come out confirming the case. At the moment, only 17 Coronavirus cases have been confirmed in Rwanda.

According to scientific modelling and simulations, one person has the potential of infecting 500 people.

Below, a statement that has just been released by the satanic regime of criminal Paul Kagame. 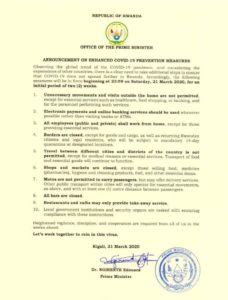