PROFESSOR CHARLES KAMBANDA’S ANALYSIS ON THE GRANTING OF RWANDA INDEFINITE RESIDENCE TO ADHAM AMIN HASSOUN, AN INDIVIDUAL WHO WAS CONVICTED IN USA FOR TERROR RELATED ACTIVITIES.

Rwanda requested the US to consider Adham Amin Hassoun a Stateless person and send him to Rwanda, under the 1954 International Convention on the Status of Stateless Persons. Lebanon is Hassoun’s native country. However, Lebanon declined to receive Hassoun after his 15 years prison sentence in the US. A Federal Court convicted Hassoun of terrorism. Rwanda was eager to receive Hassoun after serviving his prison sentence in the US

A US Federal Court found Hassoun guilty of being a member of a fundraising cell in south Florida that sent money and recruits to jihads overseas. Court heard that Hassoun recruited Jose Padilla, a Chicago street gang member who converted to Islam and was later accused of plotting a radioactive “dirty bomb” attack in the U.S. The two met at a Mosque in Florida. Jose Padilla was found with a dirty bomb which prosecution said was part of an unfolding terrorist plot to attack the United States.

Hassoun is said to have close links with different Palestinian militants. It’s alleged that Hassoun has links with the Sahel terrorists.

(b) Why would Kagame be interested in hosting Hassoun, a person the US and Israel consider an International terrorist?

For the past couple years Kigali enjoyed cordial relationship with Israel. However, last year, Kagame was not invited for the 75th Anniversary of the Holocaust in Germany and Israel, respectively. The same year, Nyetanyahu visited Uganda, met the President of South Sudan but did not visit Kigali.

(d) Does Moustapha and Hassoun’s presence in Rwanda mean that the Great Lakes sub-region could become a hotbed for terrorism in the future?

Qatar is accused of funding ISIS, among other terrorist organizations. The recent Rwanda-Qatar “honeymoon” is well documented.

(e) Could the Emir of Qatar and Moustapha have used their good relationship with Kagame to rescue Hassoun, under pretext of the 1954 International Convention on the Status of Stateless Persons? 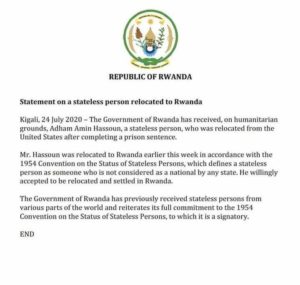