The testimony of Lionel Nishimwe before his disappearance. Lionel Nishimwe has been out of reach of all contact since February 9, 2017. Prior to his disappearance, he contacted human rights organizations, AGLAN and the Global Campaign, and reported that his life was in danger. At that time, he was attempting to hide from agents of the Rwandan intelligence services whom he claimed were hunting him down.

Prior to February 9, 2017, Mr. Nishimwe had provided both organizations with statements detailing reasons behind Rwandan intelligence services pursuit to harm him. According to Mr. Nishimwe, the central reason for his being pursued was his refusal to provide false testimony against refugees residing in Zambia after the Rwandan intelligence services paid more than FRW 2,000,000 to repatriate and host him in Kigali Diplomat Hotel.

He also provided additional important documentation to confirm those reasons as well as sponsorship by the Rwandan National Intelligence Security Services (NISS).

Mr. Nishimwe also provided with names of refugees in Zambia whom he was pressured to testify against, including some of the accusations he was being coerced to provide. 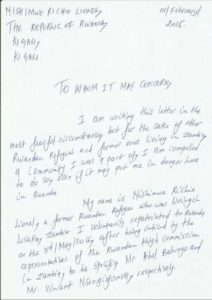 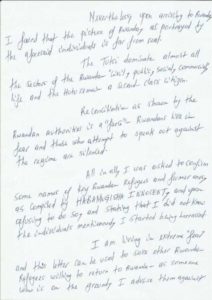 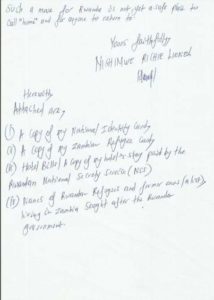