Breaking News
Home » East Africa » WHAT WE WITNESSED TODAY, IT WAS AN INTELLIGENCE LED SCAM – EXERCISE LED BY J3 OPERATIVES.

WHAT WE WITNESSED TODAY, IT WAS AN INTELLIGENCE LED SCAM – EXERCISE LED BY J3 OPERATIVES.

To J3 mafias, what happened today at Kigali Convention Centre was an intelligence exercise. For oppressed, enslaved, starving and jobless youths in the enclave it was a scam. 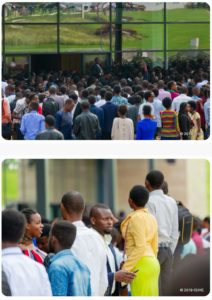 A very reliable source within the enclave’s intelligence services has confined to me that it was an exercise which was run by J3, unfortunately poor youths had to fork out $5 for the expectancy of receiving $197 for merely attending.

According to this senior intelligence operative in the enclave, he notes that the choice of the venue would raise suspicion to anyone who knows security runnings of this Country. He notes, “Kigali Convention centre is exclusively owned by the president, although it was built by tax payers money, and no single event can ever take place at KCC without background checks and verifications. Anyone who books to hold any sort of meeting or event is subject to background checks by presidential guard Intelligence Officers who man the property.”

According to this reliable source within intelligence services, that in a police state like Rwanda, such a huge gathering wouldn’t be called without the intelligence having a hand in it. It’s is next to impossible for more than 2000 people to be invited for a gathering without intelligence intercepting the information, reasons behind such gathering and motives of the organiser. What happened today was an intelligence exercise aimed at specific intelligence research.

1) The level of desperation within the over growing unemployed youths. They have now confirmed that these desperate youths are dormant bodies for future anti government recruitment. According to this source, today the intelligence learned that there is a underlying problem waiting to ignite. Desperate and unemployed youths are a danger to existence of any government most especially an autocratic regime.

2) According to this source, the exercise showed the intelligence services that these unemployed youths are able to do anything but they are refusing to join the army despite different calls for new army recruits. The questions will be why?

3) According to this source, the exercise has undermined other intelligence organisations in the country like DMI. DMI and other sister bodies came to know about this exercise in the morning. It was run by J3 mafias, obviously J3 will be telling the president that Col Andrew Nyamvumba, Brig Gen Dan Munyuza and Gen Joseph Nzabamwita are sleeping. The J3 mafias who are now sidelined wants to comeback at the centre of the pol – military control.

4) Key to everything, J3 has collected a huge data of information from these youths especially e-mails that collaborate to their names, date of birth and addresses. Without doubt, J3 will be presenting and parading to gullible oppressed and enslaved Rwandans, some sacrificial lambs as people behind the scam. 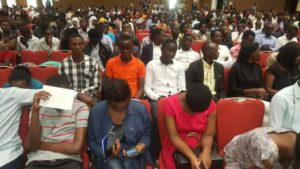 To those who don’t know, today, 25 June 19 thousands of youths in the enclave were conned into paying a registration fee for a wealth and fitness conference that never happened.

Youths turned up at a conference centre in the capital, Kigali, to find that their $5 (£3.90) online registration fee was for nothing and organisers didn’t come at the venue. And it was a scam on desperate segment of the enclave’s society.

The venue was full with more than 2,000 hopeful participants but no organisers could be found. Those who turned were told they would receive $197 for taking part. The theme for this fake conference was “wealth and fitness conference.” 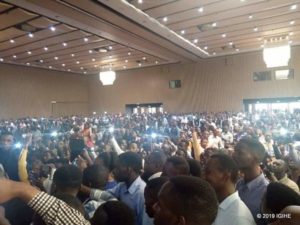 Remember, youth unemployment in the enclave has surpassed the 70% mark.

Previous HOW J3 MAFIA GANG OUT PLAYED, PILATO’S COUSIN, PEACE RWIVANGA
Next AS J3 TREACHEROUS ASSASSIN GEN JAMES KABAREBE DESTROYS THE GREATLAKES REGION, HIS YOUNG SISTER IS ONE OF THE TOP J3 OPERATIVE IN EUROPE.