Writing in the Commonwealth Round Table, Richard Bourne has asked serious questions. Is General Paul Kagame fit to host the 2020 Commonwealth summit? ”Is Rwanda a suitable host for the 2020 Commonwealth summit, given the various commitments to democracy, freedom of expression and human rights in the Commonwealth Charter 2012?” And how accountable is governance ”where Kagame has won the last two elections with presidential majorities of over 90% and has also won a referendum to end term limits that could see him president until 2034 when he will be 77?” 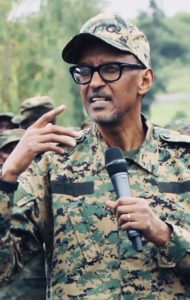 ”The real failure of the Commonwealth leaders in London, in not interrogating Rwanda’s offer to host in 2020, lies in not following through their Charter commitments to democracy (Chapter 1), human rights (Chapter 2) and freedom of expression (Chapter 5).
On democracy there is well-attested evidence of harassment of government opponents such as the People Salvation Movement and the Democratic Green Party of Rwanda. Several parties were refused registration. The Commonwealth, which sent a large group of observers to the non-Commonwealth state of Zimbabwe, was never invited to the 2017 presidential election, or the referendum before…On human rights, the High Court in London, in July 2017, forbade the extradition of five genocide suspects, citing concerns about judicial independence in Rwanda.

There is ample evidence of the regime’s use of targeted assassinations against its enemies outside the country, much of it in South Africa. In 2010 South Africa recalled its high commissioner from Kigali in protest at Rwanda’s activities and in 2014, after the blatant murder of Patrick Karegeya, a former head of intelligence, it expelled four Rwandan diplomats. More recently, the South African Court of Appeal ordered the deportation of a Rwandan intelligence agent who had come to kill another exile, General Faustin Nyamwesa, who had already survived two earlier attempts on his life.”

Lastly, Bourne asks: ”Is it too late to rescue the Commonwealth Charter from the waste-paper basket?” These questions need answers — and thanks to Bourne for raising them.