Wonders never cease in General Paul Kagame’s Rwanda. His minister Olivier Nduhungirehe used a picture of super market he stole from the internet to convince the world that Rwanda is massively distributing food to the poor. This is part of regime’s propaganda that it is distributing food to the poor across Rwanda to save them from starvation after the regime imposed a total lockdown in response to Covid19 lockdown. This claim is bogus.

According to the World Bank data, 55.5 percent of Rwandans are poor – they live on less than US$1.90 a day. Which means that 6.6 million out of 12 million Rwandans are poor. If the Kagame regime were to pay the 6.6 million poor people US$1.90 a day in lost income due to the lockdown, that would amount to US$12.5 million in just one day. This translates into US$62.5 million for a five-day working week. The regime does not have that kind of money. And, of course, the regime’s claim that it is distributing food to the poor is a big lie.

That is how Kagame minister Nduhungirehe entered the picture. He proclaimed on Twitter that “National solidarity is a core value of the people of Rwanda” and that the Rwanda government has “started the distribution of food and essential goods for the most vulnerable, who were affected by measures to prevent COVID19 from further spreading.”

There was one problem, however. The minister’s proof that Rwanda is distributing food proved to be false. The minister hunted on the internet a stock photo of super market somewhere out there. Nduhungirehe was immediately caught redhanded by Twitter users. There goes another shameful chapter in the Kagame regime’s crude propaganda that does not add up. 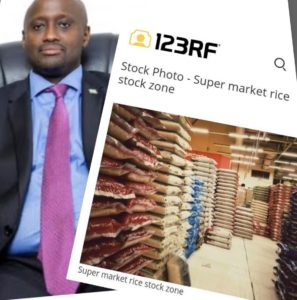