Notorious assassin Ambassador Maj Gen Frank Mugambage was recalled back to Rwanda on 15th September 2020, and currently his jobless in Rwanda, and soon, the bloodthirsty assassin will be a pauper in the streets of Kigali. His sidelining (Katebe/agatebe) will not end soon.

Col Joseph Rutabana’s names are drawn in the walls of Kami Military camp where he was once in charge of interrogation, and his methods of torture and executions at this Military camp are well documented. In Uganda, Col Joseph Rutabana will find his long time friend, Col Burabyo James, Rwanda’s notorious Defence Attaché in Uganda.

Col Joseph Rutabana and Col James Burabyo are friends, and had an excellent working relationship at Rwanda’s Directorate of Military Intelligence. The two brutal assassins were both under death merchant Maj Gen Jack Nziza, they managed together Kami Military detention Centre, a well known human rights abuse Centre in Rwanda that is exclusively controlled and managed by the Directorate of Military Intelligence (DMI). 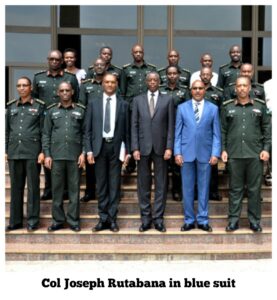 After years of working in separate countries, Israel for Col Joseph Rutabana and Uganda for James Burabyo, now, the two notorious assassins are re – uniting, to manage Kagame’s embassy in Uganda. Under criminal Paul Kagame, embassies are outposts of his Directorate of Military Intelligence.

Prior to this appointment, notorious assassin Ambassador Col Joseph Rutabana was Rwanda’s ambassador to Israel, and now, he has been relocated to Uganda to continue on what assassin Maj Gen Frank Mugambage had started.

Joseph Rutabana or Frank Mugambage have never been diplomats, they are ruthless killers with no single remorse or pity.

​​​​​It was due to support and recommendations from death merchant Maj Gen Jack Nziza that notorious assassin Col Joseph Rutabana was appointed as:

1) Defence and Military Attaché at the Rwandan Embassy in South Africa.

2) Head of the Rwandan Diplomatic Office in Khartoum, Sudan.

3) Permanent Secretary in the Rwandan Ministry of Defence.

4) Ambassador of Rwanda to Israel.

Col Joseph Rutabana was shaped by Jack Nziza into his own image, an image of brutality and human rights abuses through Rwanda’s Directorate of Military Intelligence (DMI).

Previous QUESTIONING DICTATOR PAUL KAGAME IS A PERSONAL SACRIFICE.
Next THE NYAMVUMBA BROTHERS, A PERSECUTED FAMILY.