When I noted that this is a waste of resources summit, some people may have questioned.

In the photo below, President Museveni and accidental president Felix Tshisekedi were wearing headphones listening to Portuguese translation on what the president of Angola – João Manuel Gonçalves Lourenço was talking about.

To him, the summit was merely part of his usual jet love travels; totally his slim body was present at the summit while his evil mind was in eastern DR Congo were his 8 military brigades are killing, plundering resources and planning to burn the region.

As noted in my earlier post, with Pilato still at the helm of the potato enclave, peace in the region will continue to be a far fetched theory. This summit was a mere waste of time and resources, as Pilato continues with his evil plan of burning the greatlakes region. 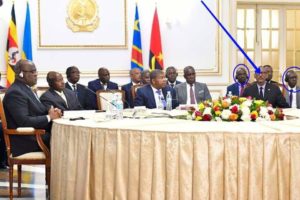 Previous THE ENCLAVE’S PRESIDENTIAL SUCCESSION HAS ALWAYS BEEN THROUGH ELIMINATIONS
Next THE WAR OF CAT AND MOUSE BETWEEN CRIMINAL PAUL KAGAME AND TREACHEROUS ASSASSIN GEN JAMES KABAREBE . PART 1