THE ENCLAVE’S PRESIDENTIAL SUCCESSION HAS ALWAYS BEEN THROUGH ELIMINATIONS

In Rwanda, they eliminate each other. And for the case of former President, Pasteur Bizimungu, after being quietly removed in 2000, he was thrown in prison and later released, with a life time restraint orders from DMI. He can’t leave Kigali to any part of the country without permission, he has no passport or allowed to seek employment anywhere.

He can’t even be invited in any government function; and for private functions, oppressed and enslaved Rwandans fear to invite him because of the repercussions from the junta state. He is literally living like a leprosy sufferer in the 17th century.

Below, a photo of ex-presidents of Tanzania and current president of Tanzania – President John Pombe Magufuli. 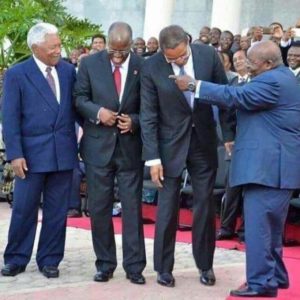