The humanist Jjaja opened the door of opportunities to this destitute street thug. He recommended him for a military intelligence course at Monduli military training school in Tanzania. In short, Jjaja picked this thug from the street and took him up to the presidency.

Today, 41 years since Jjaja picked up this skinny thug from the street of Kampala, the thug is now spending sleepless nights hatching and planning ways to eliminate Jjaja. For more than a decade the thug has always logistically supported anyone who wants to remove Jjaja. The skinny thug has forgotten how Jjaja picked him up from the street; gave him clothing, gave him shelter, gave him education although he failed in this field, gave him office and later supported him into presidency.

The thug illustrates the best form of Satan in human body. A thug who can’t remember or appreciate those who did good to him, instead, this death merchant thug started by killing those who were once close to him; childhood friends, O.Bs, comrades, those who supported and helped him,…..etc. 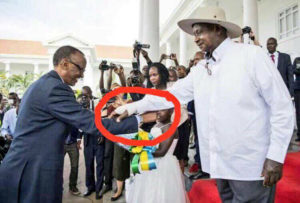 Previous MAJ GEN JONAS LUIZE PADIRI, THE COORDINATOR OF CRIMINAL PAUL KAGAME’S PROJECT IN DR CONGO
Next Banyamulenge are telling their stories at the hands of criminal Paul Kagame