A country can’t have political uncertainty and expect economic growth; unless that Country is Rwanda. 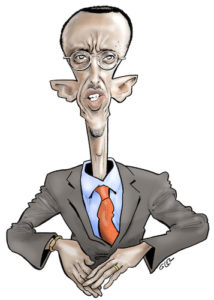 During this year’s budget presentation, Rwanda’s finance minister – Dr. Uzziel Ndagijimana cameout to dupe and con the public that, in the last financial year, the potato enclave witnessed gains/increase of foreign investors in Rwanda, however, he came short of telling us which sector(s) are these investors pouring in the enclave investing in. While for 2018/19, the rest of the region where registering an average GPD growth of around 5.9% – 6.2%, as usual, the masters of doctoring in Kigali came out to tell the world that the Country’s GDP in the last financial year was around 8.6%.

Dr. Uzziel Ndagijimana accredited this growth on “strong” performance of agriculture, industry/manufacturing and service sectors. In reality, we all know that all these sectors are totally dead. The enclave’s minister of finance – Dr. Uzziel Ndagijimana was merely reading a fabricated dossier during the budget presentation.

Dr. Uzziel Ndagijimana intentionally avoid to tell oppressed and enslaved Rwandans that the enclave has been operating on a credit card, and now the national debts have surpassed the $ 4 billions USA dollars mark for a country the size of Kampala city and it’s metropolitan.

*Realy, what has been sustaining or bringing this kind of economic growth for the last 20+0 years? Remembering that for the last 20+ years, the country has witnessed GDP growth averaging 7.5% to 10%.

* Which economic sectors that has been supporting this kind of growth for the last 20 years?

* With this kind of growth for the last 20+ years, why is the enclave – Rwanda still depending around 40 – 48% of her national budget from donor Countries and borrowing? By now it should be a donor country not a donor dependant!

* We have to remember that it took tiger countries of Singapore and Malaysia, ten years of GDP growth of around 6% to move from agrarian and fishery economy to industrial – service economy. This growth made the Tiger countries develop the best and competitive human capital in the world. How is Rwanda’s development of human capital in relation to her neighbours? Kagame’s school – education system is a witness to this question.

Now, economic lies and fabrications have started catching up with the skinny brutal dictator. In reality, the economy is crumbling, the SATANIC SYSTEM has over borrowed and debt agencies have started asking for repayments for the cash borrowed by the potato enclave.

* The country is currently experiencing volumes of business bankruptcy and closures. The cost of living is sky rocketing, for civil servants and the general public, especially those in Kigali, life is becoming unbearable – little hell.

* Civil servants are going for months without being paid their salaries. Teachers and nurses being the biggest recipient of this economic squeeze. For recently, Rwandair staffs are also complaining for late payments of their salaries and remunerations.

* Youth unemployment is at a staggering 70%, with redundancies on daily basis.

* It’s only in Rwanda and North Korea were you will be told about exorbitant economic growth, yet the country export next to nothing. In case of Rwanda, the country is facing massive trade deficits, yet state janjaweeds will go in front of the camera to sing about spectacular economic growth.

* Rwandans are on exodus and youths being at the forefront, with Uganda registering the highest number of this economic exodus. Why flee from a country which is economically doing well?? It’s only in the enclave were citizens are fleeing from the basket of hope into the oblivion of Malawi or the scrubs of Mubende in Uganda.