Dear oppressed, enslaved and starving Rwandans, I invite you to congratulate DMI operative Gatete Ruhumuriza for making it within assassin Dan Munyuza’s circle.

If there is anyone in the enclave who has tried his best to enter the ruling circle of the satanic system, it’s DMI operative Arthur Asiimwe, the current director of Rwanda Broadcasting Agency and DMI operative Gatete Ruhumuriza.

The difference between the two, it’s that Arthur Asiimwe has class while Gatete Ruhumuriza still has maro/village behaviours from the Bushes of DR Congo. But don’t be mistaken, both DMI operatives are ruthless and capable of doing anything in the quest of getting the lion’s share.

In the photo below, Gatete Ruhumuriza is seated next to chief assassin Brig Gen Dan Munyuza and next to DMI operative – Gatete Ruhumuriza, it’s Albert Rudatsimburwa the weed man who’s father is Belgium and was introduced into the ruling circle by Richard Murefu brother to Jeannette Kagame; Albert Rudatsimburwa was picked from the streets of Brussels, Belgium, where he used to sing Karaoke to different bars, and taken into the political limelight of Kigali.

The photo below shows how maro boy – Gatete Ruhumuriza achieved his dream, the dream of mingling with senior members of the satanic system ruling the enclave. To this maro/village boy, seating next to chief assassin Dan Munyuza is a big deal.

DMI operative Gatete Ruhumuriza has achieved his evil dream of mingling with high ranking members of the satanic system through constantly attacking pro democracy and human rights activist Diane Rwigara and her family without sparing her assassinated father Assinapol Rwigara.

In the blue cap, seated in a second row, it’s Jeannette Kagame Gasana’s brother, the millionaire Richard Murefu. Richard Murefu as a brother inlaw to criminal Paul Kagame, he manages some of criminal Paul Kagame’s wealth. Next to Richard Murefu, it’s DMI assassin Pascal Kanyandekwe who was implicated in the 2010 attempted assassination of Gen Kayumba Nyamwasa, and the South African authority through him out of the country after becoming a persona non grata. 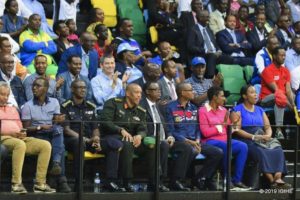