BREAKING NEWS: RWANDA’S FOREIGN MINISTER RICHARD SEZIBERA IS ON THE PROCESS OF BEING RELEASED FROM MEDANTA HOSPITAL IN INDIA.

Information which has just landed on our desk, it’s that of Rwanda’s foreign minister who was critically ill due to poison will soon be discharged and be given a green light to return back to Rwanda for recuperation.

According to my sources, the enclave’s foreign minister was transferred to Medanta Hospital Gurgaon, India, two weeks ago from Aga Khan Hospital. His transfer was due to how the social media was a washed with stories on how the junta government had refused to transfer him to India or Singapore after doctors from Aga Khan Hospital advised that his in need of specialised treatment against internal organ infections.

According to my sources, criminal Paul Kagame approved the transfer of Dr Richard Sezibera after different media outlets had started asking his were abouts, current health condition and pinning on assassination attempt against his life.

After sustained campaign on social media and media outlets in demanding the brutal junta regime to release a statement on rumours surrounding Dr Richard Sezibera’s health, criminal Paul Kagame who had realized that his evil plan of eliminating his foreign minister has been exposed, decided to approve the transfer of Dr Sezibera to India’s Medanta Hospital.

As I post this information, specialist doctors on Medanta Hospital are in the process of releasing Dr Richard Sezibera.

Over the years, the satanic system has used poison as a tool to eliminate those they consider as undesirable, innocent Rwandans and foreigners have died at the hands of criminal Paul Kagame through cruel elimination mechanism of poisoning them, merely for holding views which are different from his satanic system. 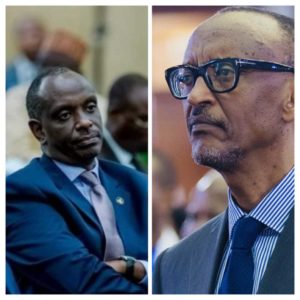 In early July 2019, Dr Richard Sezibera made a visit to UK and France. According to my trusted source within DMI, Dr Richard Sezibera was poisoned in UK under the supervision of Jimmy Uwizeye, Rwanda’s first secretary at their U.K embassy. Jimmy Uwizeye is a notorious external intelligence operative who was declared in November 2006 a persona non grata in Uganda due to his subversive activities and he was letter deployed in UK for the purpose of building DMI cells across Europe, especially in UK, Belgium and France.

While in UK, Rwanda’s ambassador in UK – Yamina Karitanyi invited Dr Richard Sezibera for dinner at her residence. We have to remember that Yamina Karitanyi rose through the RPF hierarchy by merely being a concubine the death merchant Jack Nziza than her intellectual proficiency or ability. According to this DMI source, it was during this dinner at Rwanda’s ambassador’s house in U.K that Dr Richard Sezibera was poisoned.