Over the week in several media outlets, there were accounts of military operations against one of the main Rwandan armed opposition groups, known as Democratic Liberatiion Forces of Rwanda (FDLR). In the attacks, the overall commander of the armed branch known as FDLR/FOCA, Lt General Sylvestre Mudacumura was killed. Democratic Republic of the Congo (DRC) government troops FARDC immediately took credit. AfroAmerica Network, based on the information provided by sources in Rwanda, within the FDLR/FOCA, and FARDC has been able to put together the story of what really happened. This is what is known:

In June-July 2019, the DRC government and FARDC commanders held several meetings with their Rwandan counterparts to discuss the security in the region. During the meetings Rwandan and DRC government and military leaders agreed that the Rwanda government will send special forces in the DRC to launch covert military operations against Rwandan rebels. The agreement provided that operations would be only planned, led, and conducted by Rwandan military troops, wearing FARDC uniforms. Rwandan commanders could select a few FARDC during the operations. FARDC military leaders would only be informed after the operations and would take credit of the successes, while denying failures.

Since July 2019, Rwanda started to deploy troops on the DRC territory, especially in the Rutshuro area. Some troops moved closer to Rwandan rebels camps, to approximately 2 kilometers, as the crow flies. From there, they could observe all the movements of FDLR/FOCA. Some sources confirmed to AfroAmerica Network that Rwandan Military also used drones to conduct surveillance. 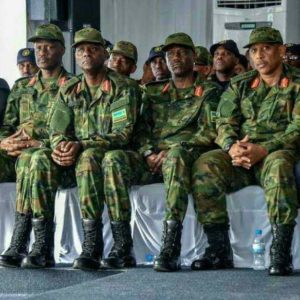 In August 2019, the head of security guards of General Mudacumura was captured by a unit of those Rwandan Special Forces, in FARDC uniforms. He was tortured and disclosed the details of the security system set up by FDLR around its areas of control, its troops, and top commanders.

The meeting ended in the evening of Sept 17, 2019. The meeting secretary, known as Sixbert Soso who was a civilian in charge of administrative affairs within the office of the FDLR President General Gaston Iyamuremye aka Gen Byiringiro, and Major Gaspard, the assistant to Gen Syslvestre Mudacumura, started putting together a final report of the meeeting and its resolutions.

Rwandan Military Special Forces, along with a few selected FARDC troops launched attacks in the night of Tuesday leading to Wednesday morning, September 18, 2019. The attacks, conducted by special forces that crossed from Gisenyi on September 16, 2019 originated from the positions hidden from the view of the FDLR guards. The troops located at 2km, as the crow flies, remained visible and active to draw attention away from the infiltrators.

The objective of the attack was to capture General Sylvestre Mudacumura alive and bring him to Goma, where FARDC will use him as a trophy and propaganda tool and to claim victory over Rwandan rebels.

Rwandan Special Forces along with the few FARDC commanders entered FDLR commanding post all way to General Mudamura’s bivouac, where they surprised Sixbert Soso and Major Gaspard who were putting the report together and General Mudacumura, resting. They killed Sixbert Soso on the spot, shot and wounded Major Gaspard, and seized General Mudacumura. Two Rwandan special forces held him by the jacket, while others followed from behind trying to get him out of the bivouac and the post.

FDLR/FOCA special forces, known as CRAP were already alerted of the infiltration and started attacking the Rwandan Miltary special forces. They killed many Rwandan special forces troops, but it appeared that the Rwandan special forces commanders did not care much about the number of the soldiers killed. The death toll was less important than capturing General Mudacumura and bringing him to Goma, alive. During these attacks, Rwandan Special Forces managed to only kill the FDLR commander and a civilian, Sixbert Soso. The other FDLR officer, Major Gaspard was shot, but survived.

FDLR/FOCA CRAP special forces also killed the FARDC top commander who was with Rwandan Special Forces. AfroAmerica Network is getting the details on the top FARDC commader killed. When Rwandan Special Forces realized that they could not get General Mudacumura out alive, they shot him point blank into the heart from behind and tried to carry his body. That also proved to be difficult, as FDLR/FOCA CRAP had killed many of the attackers, who could have helped to carry the body.

The focus then shifted to getting the remaining Rwandan special forces attackers out of the FDLR/FOCA base. They dumped General Mudamura’s body, took pictures, and started exfiltration. The next morning, the Rwandan Special Forces along with FARDC troops, came back, with heavy troops reinforcements, to carry the bodies of their soldiers killed by FDRL/FOCA CRAP. They loaded the bodies in the military trucks that were waiting in the distance and carried them back to Rwanda.

In the end, things did not go as expected, for Rwandan Special Forces. FDLR/FOCA CRAP reacted quickly and thwarted the operation. However, FDLR/FOCA still lost its overall military commander, which may have several implications on its future.

The casualty figures diverge based on the sources. Rwandan and FARDC sources say that FDLR/FOCA lost tens of soldiers, including many high ranking commanders. On the FDLR /FOCA side, the sources say that only 2 top leaders, General Mudacumura and Sixbert Soso, a civilian, were killed. Major Gaspard and a few soldiers were shot but survived.

AfroAmerica Network will continue to follow and update as the details come.