Through her rise to power, she has destroyed careers of innocent citizens without sparing criminal Paul Kagame’s house boy Generals. She is the master of intrigue, nasty managerial operator and an office assassin who lacks any single respect, ethics or love for compatriots. She is as horrible as her boss and boy friend – criminal Paul Kagame, reasons she has managed to survive for long. 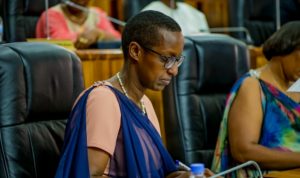 By creating a new cabinet post for his side dish, a cabinet post which will have roles similar to those of the artificial prime minister – Eduard Ngirente, criminal Paul Kagame has now indirectly presented his side dish as the real Prime minister. Now, ruthless Mpambara Ines, is Minister in charge of Cabinet Affairs, managing roles meant artificial Prime Minister – Eduard Ngirente.

Previous PLEASE TAKE TIME TO WATCH THE VIDEO AND LISTEN TO THE MESSAGE: SOS for innocent people who are being kidnapped, incarcerated, tortured and assassinated in Rwanda by Criminal Paul Kagame and his satanic regime.
Next CRIMINAL PAUL KAGAME’S GENERALS TEETHING, WHILE OPPRESSED, ENSLAVED, STARVING AND UNEMPLOYED RWANDANS ARE CRYING.