Everyone knows that prosecution services/Authorities are legal entities responsible for presenting cases in criminal trials against individuals accused of breaking the law. But in Criminal Paul Kagame’s Rwanda, they are also pathological/medical examiner’s responsible for state coverups. 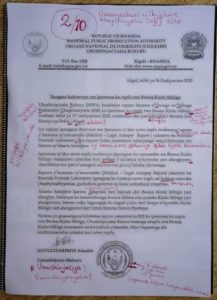 Previous Portia Karegeya , Col Patrick Karegeya’s daughter at 2020 during Col Karegeya Memorial Day in Washington DC.
Next IT SEEMS NATURE WILL DEFINITELY FORCE CRIMINAL PAUL KAGAME TO OPEN RWANDA – UGANDA BORDER, SINCE THE ONLY ACCESS TO SEAPORT HAS BEEN HIT BY NATURAL DISASTER.