Breaking News
Home » Flash Back » DICTATOR PAUL KAGAME: A THIEF AT THE HELM OF THE POTATO ENCLAVE

DICTATOR PAUL KAGAME: A THIEF AT THE HELM OF THE POTATO ENCLAVE

Criminal Paul Kagame’s corruption against gullible Rwandans started way back. The man has been grabbing and looting anything on his way without any single mercy or pity.

While all sorts of people, including old grandparents were financing and contributing to RPF/A liberation struggle, criminal Paul Kagame who was then the RPF/A coordinator was busy looting and embezzling finances of this rebel movement.

For  example, Criminal Paul Kagame used RPF/A finances to take his wife, Jeannette Nzirorera Kajuga Gasana Kagame to Belgium to give birth to his children. Apart from the first child, all the other three children were born in Belgium using looted funds from RPF/A rebel movement coffer to finance these extravagant trips. 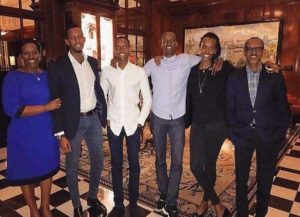 While all families had tightened their belts due to their role in financing and contributing to the RPF/A struggle, criminal Paul Kagame and wife were living an extravagant life style with wife making several trips to Belgium, France and Germany. And everything being financed by the rebel movement – RPF/A coffer.

It was during these foreign trips that Jeannette Nzirorera Kajuga Gasana Kagame met his childhood and adulthood friend, Eugene Gasana. And what came out of their encounter(s) in cities of Europe is well documented, and a product is there for everyone to see.

Previous Prof Charles Kambanda: KAGAME does not know that espionage and spying are crimes in all countries.
Next FLN CLAIM THE BWEYEYE ATTACK