One has to appreciate the level of ineptness and idiocy of criminal Paul Kagame and his goons. Blood of innocent people has overshadowed the little reasoning they may have. 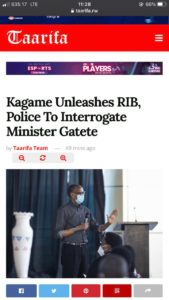 These two articles were deleted from Taarifa website within four hours of releasing/posting them. These articles were written and released under instructions of Directorate of Military Intelligence (DMI) and Office of Government Spokesperson which is controlled by Ange Kagame. The articles are part of the usual trend that oppressed and enslaved Rwandans are familiar with, the trend of imaging the bloodthirsty dictator as incorruptible ruler and aggrandising his image. However, this time, the usual public relation scam didn’t go as they wished. The brutal dictator personally ordered the articles to be deleted.

The articles touched on how criminal Paul Kagame shamed corrupt officials making them to stand in-front of RPF executive committee members who attended the meeting. The article mentioned how dictator Paul Kagame humiliated the current minister of infrastructure Clever Gatete, his brother – notorious assassin Gen Emmanuel Gasana and Jean Marie Vianney, referring them as corrupt officials who needs to be in prison. The articles noted how dictator Paul Kagame called the police to start investigating infrastructure minister – Clever Gatete.

For those who have followed criminal Paul Kagame for long, know very well his theatrical games, comedies and plays for oppressed and enslaved citizens. No single embezzlement that goes within government ministries without the approval of dictator Paul Kagame or his estranged wife Jeannette Kagame. Dictator Paul Kagame and his estranged wife – Jeannette Kagame are the single most individuals who have embezzled the potato enclave (Rwanda) to its knees.

Knowing very well that what he said during RPF executive committee meeting was a mere theatrical acting for unsuspecting gullible, the brutal dictator instructed his intelligence operatives to delete these two articles that were written on how his fighting high level corruption. In Rwanda, corruption starts with the Kagames and ends with the Kagames.