1) Jeannette Nzirorera Kajuga Gasana Kagame, currently running Kagame family empire after the near collapse of crystal ventures. She is the head of the mafia business empire and being supported by his brother Richard Murefu. Of recently, she has withdrawn from frontline limelight to concentrate on family business empire and taking care of her very ill mother.

2) Ange Kagame, the real Prime minister of the potato enclave – Rwanda, heading the daily micro managing of the formal government. Like her father – criminal Paul Kagame, she is extremely obsessed with power, and she has tasted blood of innocent citizens. 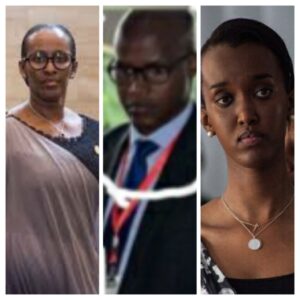 Oppressed and enslaved Rwandans will ask, what about Paul Kagame? As noted in my numerous posts, the dictator is battling personal health issues, and he has delegated the ruling of the Kingdom to his daughter, estranged wife and a very trusted house boy General.