Dear oppressed and enslaved Rwandans, did you know that Criminal Paul Kagame and his DMI fabricators wanted to add Rugema Kayumba, Philemon Mateke and Edgar Muvunyi Tabaro in Callixte Sankara dossier? But it was stopped because they saw the fabrication cooking wouldn’t be bought by right thinking minds.

According to this source, than adding Rugema Kayumba, Philemon Mateke, Edgar Tabaro and Charles Sunday. Criminal Paul Kagame and his DMI fabricators decided to go with one person, Charles Sunday in order to avoid too much theatrical drama in their fabrication.

If there is any one person who has been hunted by DMI assassins for years, it’s Charles Sunday. Captain Charles Sunday is one of the top person that has been persecuted by the SATANIC SYSTEM. For years, he hasn’t been living a normal life.

Captain Charles Sunday’s life has been that of hiding and constantly surviving DMI thugs and double agent Kale Kayihura. The hunt for his life started in the streets of Kigali to streets of Uganda. His names have been main features in DMI owned and managed media outlets. For him and Rugema Kayumba, assassin James Kabarebe hates them extremely.

Now, criminal Paul Kagame and his DMI fabricators have added captain Charles Sunday in their fabricated dossier. A dossier which is meant for PR presention against Burundi and Uganda than for the purpose of fair justice on behalf of Maj Callixte Sankara who was kidnapped, tortured and now being used to collaborate in a fabricated dossier after personally being tortured by criminal Paul Kagame himself.

In this fabricated dossier, criminal Paul Kagame went for two patriotic Ugandans that he hates to the core. These are Ugandan patriots who love their country and been defending the territorial integrity and sovereignty of their country for the last 20 plus years.

When Major Callixte Sankara was produced in criminal Paul Kagame’s Kangaroo court, a DMI prosecutor mentioned Brig Gen Abel Kandiho and a certain Ugandan Colonel. According to reliable source near the fabrication cooking, the colonel is Charles Asiimwe who heads JAT. It’s not Col Kaka Bagyenda as people assumed.

According to a very reliable source, it wasn’t by mistake that the DMI prosecutor didn’t mention the name of the colonel, criminal Paul Kagame is still making up his mind on which name to fill in his cooked fabricated dossier. On whether to stick with Col Charles Asiimwe or go for Col Kaka Bagyenda. But at the moment, although not mentioned, the colonel is Charles Asiimwe of counter Terrorism (JAT).

For the past 3 years, Brig Gen Abel Kandiho, Col Kaka Bagyenda and Col Charles Asiimwe have been blacklisted by the terrorist enclave as top priority for elimination by combined joint military intelligence.

Brig Abel Kandiho, Col Kaka Bagyenda and Col Charles Asiimwe have entered in criminal Paul Kagame’s list of those people he has vowed to eliminate as long as his still seating in the presidency.

In 2018, criminal Paul Kagame told his then defence minister and chief external intelligence master planner, James Kabarebe, that these three, meaning Col Kaka Bagyenda, Brig Gen Abel Kandiho and Col Charles Asiimwe; “I will hunt for them even in their retirement.”

For example, criminal Paul Kagame eliminated all command leadership which was based in Kisangani during the 2000 conflict between Rwanda and Uganda conflict. The conflict which started in Kisangani ended up in shedding of innocent blood in the streets of Kampala.

Gen James Kazini, Brig Gen Noble Mayombo, Col Sula Semakula….etc; where hunted down from the battles of Kisangani to the streets of Kampala. Criminal Paul Kagame promised them death, and he made sure that death came knocking. The same death he has been planning for years on the life of Gen Henry Tumukunde, but thanks to God, the general has survived all attempts on his life. 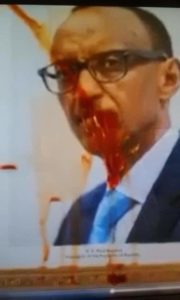 Previous PRESIDENT CYRIL RAMAPHOSA MADE SURE PRESIDENT MUSEVENI AND CRIMINAL PAUL KAGAME SEAT NEXT TO EACH OTHER.
Next WEEKEND LETTER FROM PROSSY BOONA