Kagame’s Prosperity-Creation Plan Not Centered On People But Buildings

General Paul Kagame’s socioeconomic development achievements are generally associated with Kigali, Rwanda’s capital, and mega projects in the city. Kagame mega projects include the US$500 million Kigali Convention Center, the loss-making US$1.2 billion RwandAir, and the still uncompleted US$800 million Bugesera International Airport. The convention centre, the airline, and the airport are pillars of Kagame’s grand strategy of turning Kigali into East Africa’s tourism hub upon which Kagame hopes Rwanda will become rich. Other Kagame mega projects include two stalled railway lines — one linking Kigali to Tanzania’s seaport of Dar Es Salaam, the other connecting Kigali to Mombasa in Kenya via Kampala, Uganda. Each of these rail projects would cost over US$2 billion to build. 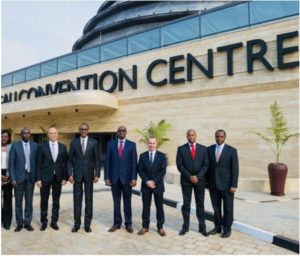 Kagame forgot human capital — people — in his prosperity-creation dream. This omission becomes evident in the World Bank’s Human Capital Index (HDI) which examines how countries invest in people to ensure future productive workforces. HDI provides comparative data on 157 countries in the world, including Rwanda, and ranks them based on five indicators as follows:

• The probability of survival to age five;

• A child’s expected years of schooling;

• Harmonized test scores as a measure of quality of learning;

• Adult survival rate (fraction of 15-year olds that will survive to age 60), and;

• The proportion of children who are not stunted.

Overall, therefore, the purpose of HCI is to illustrate how countries are investing in their people through provision of education and health over generations. Investing in people cannot be overemphasized. It is the central means of creating a productive workforce for robust participation in global markets — and the ultimate mechanism creating prosperity. 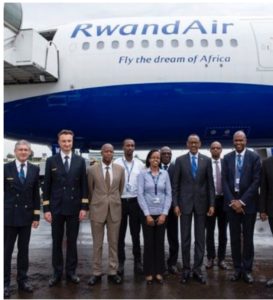 Rwanda’s Human Capital Index ranking is 142 out 157 countries. Put in another way, there are 15 countries in the world that have a worse HCI ranking than Rwanda. The East African Community (EAC) countries are ranked as follows:

In the EAC countries, only South Sudan has a worse HCI ranking than Rwanda. Kagame’s Rwanda performs very poorly especially in two indicators, namely, the quality of education and child stunting. As the World Bank explains, in Rwanda,

”37 out of 100 children are stunted, and so at risk of cognitive and physical limitations that can last a lifetime.” 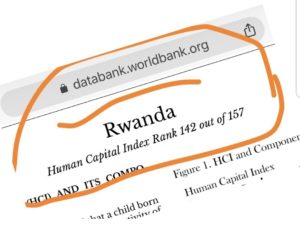 Beyond HDI, we know that Kagame prefers to source human capital from outside Rwanda. Indeed, Kagame does not have confidence in the people of Rwanda to lead strategic institutions , including those that create human capital. Take a look at these examples:

General Kagame, prosperity-creation is not merely about building impressive structures and a national airline. Development is about people — human capital. Over to you Chief.