FORMER CRIMINAL PAUL KAGAME’S PET, BOSCO NTAGANDA HAS BEEN CONVICTED OF WAR CRIMES AND CRIMES AGAINST HUMANITY BY ICC.

Kagame’s More Bad News from America – Samantha Power Who Insisted that the Rwandan Strongman Shouldn’t Seek a Third Time, Is in Charge of US Foreign Aid.

Today, at International Criminal Court (ICC) in the Hague, in Bosco Ntaganda case, the judge noted, “fighters loyal to Bosco Ntaganda disembowelled babies and smashed their heads in.”

Criminal Paul Kagame’s former attack boy becomes the first person to be convicted of sexual slavery by the ICC.

During the case hearing, Bosco Ntaganda lawyers argued that Ntaganda was a victim himself, having been recruited as a child soldier by the RPF/A. He has been the fourth person convicted by the ICC since its creation in 2002.

Bosco Ntaganda surrendered at the US embassy in Kigali, Rwanda, in 2013, after losing a power – struggle within the M23 rebel group. Than being arrested by Gen Sultan Makenga or withdrawing towards Rwanda for possible elimination at the hands of his boss – criminal Paul Kagame; Bosco Ntaganda opted to clandestinely enter Rwanda up to the gates of USA embassy in Kigali where he handed himself and requested to be transferred to ICC.

In 2013, after being sidelined by Gen Sultan Makenga in brutal internal power struggle, Bosco Ntaganda knew very well that he was an excess and liable for elimination by his former boss – criminal Paul Kagame, for knowing too much. 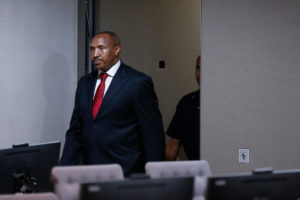 Bosco Ntaganda’s various human rights crimes and economic plundering violations would always lead to the door step of criminal Paul Kagame. Than being eliminated, Bosco Ntaganda opted the protection and comfort of the ICC.

Today, a three-judge bench found Ntaganda guilty on all 18 counts of war crimes and crimes against humanity committed in the mineral-rich eastern region of Ituri between 2002 and 2003. Don’t be mistaken, this verdict has future legal implications to SATANIC elements ruling the enclave, notably criminal Paul Kagame and his pet, treacherous assassin Gen James Kabarebe.

The ruling today looked the crimes he committed in Ituri region of DR Congo, not those committed in North Kivu. In the ruling, Judge Robert Fremr noted, ” You were a “key leader” who gave orders to “target and kill civilians.”

During the case hearing, ICC prosecutors always noted that, “Ntaganda was key in planning and running operations for the Union of Congolese Patriots (UCP) rebels and its military wing, the Patriotic Forces for the Liberation of Congo (FPLC).”

It should be noted that it’s Gen James Kabarebe who deployed Bosco Ntaganda in Ituri during the early years of 2000 to start a rebellion alongside Thomas Lubanga Dyilo who is serving 14 years sentence in the Hague.

Union of Congolese Patriots (UCP) rebels and its military wing, the Patriotic Forces for the Liberation of Congo (FPLC) were formed and logistically helped and supported by Kigali. The conviction of Bosco Ntaganda and the judgement of Thomas Lubanga are indications that the ICC is seating over sufficient evidence against criminal Paul Kagame and his echelons in Kigali; it’s only a matter of time before they face justice for their war crimes and crimes against humanity.

While reading the verdict, Judge Fremr said, “men, women and children and babies were found in the field. Some bodies were found naked, some had hands tied up, some had their heads crushed. Several bodies were disembowelled or otherwise mutilated. In one attack, fighters killed 49 captured people in a banana field behind a village using sticks and batons as well as knives and machetes.”

All three judges ruled that Ntaganda had personally killed a Catholic priest, while the fighters he commanded ran rampage in Ituri region.

All these crimes took place when Ntaganda served as the deputy chief of general staff of Thomas Lubanga – who was the leader of the UCP.