President Paul Kagame presents himself and his government as incorruptible in a region that is considered most corrupt. But on close examination, it becomes evident that his reputation is based on false branding. No government in East Africa can fraudulently seize private Companies as Kagame does. The Kagame government is a ruthless predatory and routinely grabs private companies at free will.

Take the example of the Union Trade Centre (UTC), built by the Pan-African businessman Tribert Rujugiro Ayabatwa. The businessman launched the US$20 million shopping in 2006. Kagame was the guest of honour when the mall opened its doors. And then, out of the blue, Kagame government announced in 2013, that UTC was an abandoned property, and that the government had to take it over until the owners returned.

The government lied in broad daylight that UTC was an abandoned property when it was a legally incorporated company in Rwanda and a good corporate citizen hosting 81 companies that employed 400 people.

The government then revoked the citizenship of Tribert Rujugiro Ayabatwa, the principal shareholder of UTC, a Rwandan native who at the time was living in South Africa. By this illegal act of stripping a citizen of his birthright, Kagame locked Ayabatwa out of Rwanda. From October 1, 2013, UTC tenants were obliged to pay rent to a government commission in charge of abandoned properties. 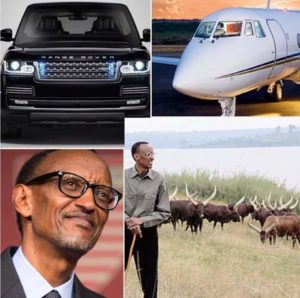 There were more surprises to come. On August 24, 2015, the government declared UTC a tax defaulter. Shamelessly the government was the manager and custodian of UTC. Now, here was the manager declaring himself corrupt. What did the government do with the rents from UTC, if the money was not being used to pay taxes, among other things? The Abandoned Property Law that Kagame used to grab UTC is clear about the role of government: “abandoned property shall be managed by the State represented by the Ministry until the owners show up.” Evidently, instead of managing UTC, the government was siphoning money from it including taxes.

Finally, on April 25, 2017, Rwanda Revenue Authority (RRA) seized UTC for nonpayment of US$1.4 million. RRA gave the government commission that manages UTC 8 days to pay the tax or else the business would be auctioned off.

It has now been two years since UTC was auction by criminal Paul Kagame. So far the threat has not been implemented. The world is watching Kagame’s law of the jungle where corruption is the order of the day.