Rutagambwa’s  boy – criminal Paul Kagame is a  curse to Rwandans.

In the land of a thousand hills, criminal Paul Kagame never falls short of making Rwandans suffer in a tsunami of bad political policies. In Criminal Paul Kagame’s land, the ruler does not need help for bad publicity because —his conduct in numerous controversies always attract increasingly fierce criticism. Whenever he has a microphone, his cavalier attitudes and unsanctioned words are mostly full of thorn orientals. Rutagambwa’s  boy is a  curse to Rwandans. He arrived in Rwanda’s state house having never got a single lecture on respect of human life.

Under Paul Kagame, political criminality is usual in highest office where frittering away of the nation’s resources is a norm and a culture. For the past 20+ years of his rule, records reveal an enduring culture of impunity and arrogance within his rule. He is a graduate in the art of “I see no evil in my actions.” 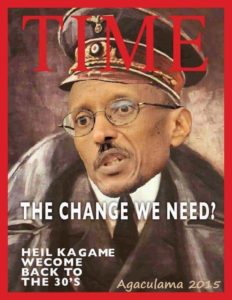 As a coordinator of the RPA/RPF, young Paul Kagame would always vow that it was time for a unique destiny and opportunity for our nation and the RPF intended to lead the most honest, most open, and most ethical Government in history of Rwanda. Dedicating to build the best possible life for Rwandans and not build the nation on false hopes; but on solid and realistic political foundations. Criminal Paul Kagame turned away from all those promises – in the process eliminating all RPF/RPA historicals whom he deemed as threats to his criminal rule.

Among the highlights of his endless greed, the ruler of Rwanda has turned the Central Bank and all government enterprises as tempting pot of money. For 22 years of his outrageous power, the country is witnessing on daily basis mysterious killings, skyrocketing of basic commodity prices – inflation, regime kidnappings,  arbitrary arrests, capital flight, mortgage foreclosures, high interest rates in all banks….etc. This is a far cry from the political and economical transparency promised by Paul Kagame.

Now, with dozens of multimillion dollar assets throughout the world at his disposal and several of his family members filthy rich through open state corruption, the RPF regime clearly values political power over clean government. For sure, Rwanda is parmanent but this criminal ruler and his goons are not parmanent. Change will come by all means.

The essential issues in Paul Kagame’s regime have always been his judgment and his imperious belief that state rules/laws don’t apply to him and his family. Under criminal Paul Kagame, the government has been radicalized on issues after issues, he has  redefined everything on his own image —without clear thought of the consequences for the country. If there’s one thing he has done, it’s the introduction of weird and expensive schemes of political partying/ celebrations at the expense of Rwanda’s tax payers. The junta preside over a weak economy and a government riven by corruption, waste, fraud and abuse.

The operation process of this junta government is totally unseemly. Corruption thrives in a big way in government offices especially within the president’s office at Village Urugwiro. Everything about the junta regime involves arm twisting, backroom deals, special privileges for Paul Kagame and his family. Potential  criminal agreements has become a normal way of doing business.  Most of the regime’s business dealings are held in close door, secret meetings, the first family robbing the Country at will and the first family affairs trumps the nation’s interest at all levels.

Secrecy that hides Government business activities from the public itself should be anathema in any Country which abides by constitution rule. In case of Rwanda, the Junta has turned Rwanda into his personal property.

In a positive note, this brutal Junta regime is in its last days, its survival cycle is nearing, the regime is tired and oppressed Rwandans are totally tired of dictator Paul Kagame and his bloodthirsty junta rule. Paul Kagame and his assassin manned regime are now facing political, economic and social presure from all sides. Internal dimensions within the RPF and army, have cracked at a point of no repair. The internal state of affairs within the army has reached at a point which is refered as critical!!

Previous Kenya vs Rwanda.
Next Kagame, Abusing Museveni Is One Thing, But His Parents?