Breaking News
Home » Human Rights - Democracy » SINGER – KIZITO MIHIGO ARRESTED WHILE TRYING TO ESCAPE FROM AN OPEN PRISON CALLED – RWANDA, WHICH IS UNDER A SATANIC REGIME.

In the early hours of Thursday morning, 13th February 20, Rwanda’s gospel singer, Kizito Mihigo was apprehended by criminal Paul Kagame’s agents while trying to escape to Burundi through panya roads.

It’s only in the potato enclave were a single civilian can be charged for conspiracy to assassinate a man who’s guarded by a whole brigade – presidential guard brigade. In 2015, criminal Paul Kagame ruthlessly sentenced an innocent person – Kizito Mihigo under false and fabricated charges.

On 15th September 18, gospel singer Kizito Mihigo together with Victoire Ingabire, were released by presidential grace.

Like other countries, without a national identity card, it’s next to impossible to access any service(s) including applying for employment, and Kizito Mihigo was always unable to access any service because of criminal Paul Kagame’s policy of denying official identities like identity cards or passports to anyone suspected of being anti regime. And gospel singer Kizito Mihigo fell in this category of oppressed and enslaved citizens. Like millions of Rwandans, he was being denied his basic human rights.

All music studios in Rwanda refused to record his music sighting orders from above. While in prison, he had written several music and expected to produce them once free. Unfortunately, once released through presidential grace he realised he was still in prison, but this time an open prison. He moved from one studio to another studio asking for a chance to record his newly written music, all studio refused citing orders from above. Reasons since being released on 15th September 18, he hasn’t released any song.

On the 15th September 18, Kizito Mihigo was only released from a closed prison to an open prison called Rwanda. According to police source, on early hours of 13th February 20, the oppressed, enslaved, unemployed and starving gospel singer was caught by criminal Paul Kagame’s agents while trying to cross to Burundi through a panya road.

In the photo below, on your left, it’s Gospel singer Kizito Mihigo after being arrested today, 13 February 20, alongside two of his guides. 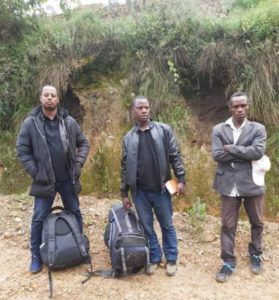 Previous HOW PRESIDENT PAUL KAGAME SECURED THE GOVERNMENT OF ANGOLA IN HIS CORNER AGAINST PRESIDENT MUSEVENI:
Next CRIMINAL PAUL KAGAME HAS SACKED HIS HEALTH MINISTER.