The attackers who were well armed and in sizeable numbers attacked military and reserve force detachments in Kinigi sector in Musanze district, northern province. Kinigi is the potato enclave’s tourist hub due the gorillas in the Volcano National park.

According to sources within the military, the assailants attacked few minutes to 10:00 PM, and attacking all three military defences within Kinigi. The exchange of fire took more than two hours with RDF reinforcements coming from Busogo, Cyuve and Muhoza. 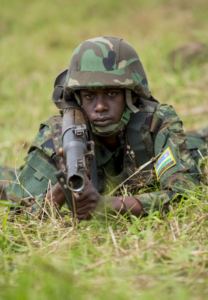 After more than 2 hours of close exchange of fire, these well armed assailants withdrew back through the National Park. According to a military source, none of the assailant was killed or captured, and on their side, they lost 8 men and 4 in critical condition. The military source notes that the nature of the surprise attack led to Rwanda Defence Force sustaining casualties.

This military source further notes that, the attackers had intelligence information about the military positions in Kinigi, and knew the area very well. It was a well planned attack.

After the withdraw of the assailants, criminal Paul Kagame’s forces did what they do best, they started arresting innocent people and executing others in a rampage against those they suspect of aiding the assailants. In their doctrine, they will eliminate innocent people as a warning to anyone who may want or be thinking to help anti Kagame dissidents.

By early morning, criminal Paul Kagame’s special force units that are deployed deep within Volcano National park were sweeping the park looking for the attackers.

Previous THE SATANIC SYSTEM RULING THE POTATO ENCLAVE – RWANDA HAS BLACKLISTED 24 WEBSITES – ONLINE RADIOS
Next WHERE IS DR RICHARD SEZIBERA?