By Christmas time 1990 RPA was conducting hit and run operations along the border in Byumba and Ruhengeri. These were extremely difficult operations because morale in RPA ranks was at it’s lowest. It was the first time I ever saw an army being matched to war by military police armed with sticks beating them like beasts from behind.

RPA was sustaining casualties like it was WWI all over again, yet it had few men. Meanwhile FAR enjoyed high morale and topographical advantage. As you move from Uganda to Rwanda in Byumba and part of Ruhengeri, it’s a steep climb until you get to Rukomo on the Katuna Kigali road. The rest of the journey to Kigali is slopping down or on in a flat valley.
It’s another steep climb from what is currently Burera District, until you get to a place called Bushinga. The drive from this place to Byumba town on hill tops is in the clouds.

The other climb is from the Eastern side of Muhabura which ends on one of the highest points in East Africa in the current Karongi District ( former Kibuye) This high trail also goes southwards throuth Nyungwe forest to, Bugarama Hills at the border with Burundi and terminates as a low altitude point on lake Tanganyika.

This meant FAR positions would always be looking down on any attack front by RPA. However, it was clear RPA commanders were very determined & disciplined. Even with heavy casualties, they would withdraw in an ordely manner. The objective was to show the Rwandan refugee community that the fighting was continuing despite the Mutara fiasco. The objective was to push a story in the international media. At the time, i thought RPA was making Kamikaze attacks, because i couldn’t see any military objective of those missions. They were fighting fearlessly but loosing. Moving to the Muhabura mountains did not help the situation at all. They were later to begin infiltrating and attacking FAR & civilians from behind. 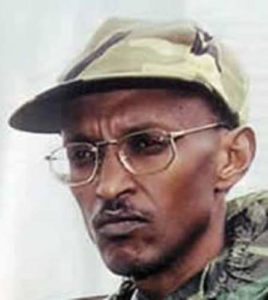 However, FAR’s intelligence was very faulty or there was misinformation from RPA because they began assaulting particular locations when the only people in those areas were Ugandans. They would assault a forested area where RPA would have camped a week before. Sometimes, when there was no RPA at all in the area. Because of the death toll of Ugandans from FAR machine guns 12.7mm 14mm, and motors the population along the border protested and a buffer zone had to be created to secure Uganda’s territory. That’s when NRA was forced to give RPA a push, an act that most Ugandans participated in, especially in carrying heavy artillery pieces to hill tops. Preparations for this operation lasted a while and Lt. Col Kyakabale commanded the overall operation.

Captain Rwitamishonga (NRA) an artillery specialist, commanded the artillery units.
RPA had no option but to allow Kyakabale to command that battle.

When the battle ended, Byumba had been captured and surrounding areas. This was the first time, RPA held territory in Rwanda under Paul Kagame.

Clearly, he was aware he still had to prove himself capable. It’s then that he embarked on his personal schemes but also RPA transformed greatly through training, into an independent force.

Paul Kagame only plays around with President Museveni because it’s indeed Paul Kagame. Others would live with their senior comrades much more respectfully.

My point is this: It’s at this moment that, coupled with the purging of Fred Rwigema loyalists, Paul Kagame decided to take a route that has made Rwanda a one giant grave yard.

He began human sacrifices to turn war fortunes into his favour. From secondary sources, it has been said from different sources that Paul Kagame approached a Masaka based prophetess, who demanded from Kagame, a very handsome Tutsi young man to sacrifice and the war would turn. This is in early 1991. Paul Kagame must have been making consultations before because his evil schemes had began around 1988, going by a retrospective study of his behaviour. I think he turned rejection from his peers into pathologic hatred & determined to show he could outmanourver all those who underlooked him. 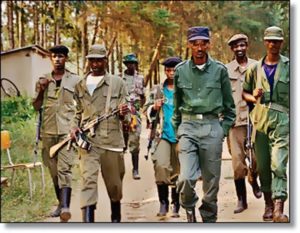 One man ended up becoming one man too many for the prophetess demanded for more and more. Paul Kagame knew he couldn’t touch Ugandan born soldiers, so he used to pick from amongst young men who had come in from Burundi. These ritual killings became too much so that Barundi parents recieved the news and stopped sending their children to join RPF/A. Paul Kagame visited Bujumbura to answer charges of killing Burundi born soldiers and he denied it. He claimed these boys were used to soft life, yet war conditions were harsh. He claimed these Bujumbura boys couldn’t get back from combat missions without severe injuries or dead. Of course all these were all lies. However, he promised that no one would die anymore & indeed the killings stopped.

They only began again at a very high scale on the 6th of April 1994. I personally believe that genocide was pure evil that invaded Rwanda through the actions by Paul Kagame to defend himself against many who would have revenged Rwigema death, but also to become President of Rwanda.

The entire operations were carried out by individuals who grew up to form what we know today as DMI. I have learned not to mention names because, I’m not a judge, with the exception of Paul Kagame. This group that called itself DMI was and has been involved in only one business: The business of Killing because I believe this is what gave Paul Kagame power and sustains his hold onto power. If he can’t kill, he can’t be President of Rwanda. Combat Intelligence was handled by Kayumba Nyamwasa and other officers I have come to learn about.

Karenzi Karake handled UNAMIR Intelligence, which played a big role in RPF’s victory. But squads of killers made up the murderous DMI which became the mainstream Intelligence organisation for Rwanda when Paul Kagame became President in the year 2000.

I believe the 1m + people who died in Rwanda and later another 5Million who perished was evil in action and evil that had gone beyond the control of Paul Kagame himself.

One witness account stands out: I have heard it from two sources who were present when a revealing incident happened. Let me quote Lt. Aloyse Ruyenzi, who was his close body guard during the war:

He was present in 1994 at Muhura when Gen Paul Kagame’s convoy came across a large group of Rwandans who were in a market ( the equivalent of Ekikomera) the war had ended in this part of the country and RPA was in control.
Paul Kagame climbed on top of a jeep and fired a 12.7 mm anti aircraft gun in the population and laughed uncontrollably while doing it. He then ordered everyone in his entourage to do the same. Some of his guards did not heed his command. On returning to Mulindi, those who had not participated in the killing were arrested and later kicked out of his body guard unit.
Apart from Ruyenzi who put it down in writing, I have heard it from two other sources who were present that day.

Paul Kagame is a very unique character. He can go for months without offering a single smile. Forget the made up ones in public. His most important pleasure is from killing.

These days he has changed compared to when he was a rebel leader: He gets into a status of complete quietness and when he is communicating, he can easily erupt with anger like a volcano ( Umujinya w’umuranduranzuzi in Kinyarwanda). It happened recently in a speech to parliament but he managed to put a lid on it before a complete eruption of demonic anger.

Whenever he is in this situation, he has to leave the country if he in Kigali, after he has ordered high profile killings, preferably Tutsi. When he achieves a reasonable measure of killings, he goes into a trance that may last a day or two.
When he wakes up, he is able to behave normally & get into his normal position of power. He can make speeches and issue threats without loosing control.

Most of his Generals are under some kind of spell because he abuses them like defenceless children, including slaps.

Previous FROM MILITARY INTELLIGENCE SOURCES: THE TRUE REASONS BEHIND THE KIDNAPPING AND INCARCERATION OF MISS JACKIE UMUHOZA, AS SHE SURVIVES EXECUTION.
Next DICTATOR PAUL KAGAME, A TERRORIST WITHOUT BORDERS: