Breaking News
Home » Human Rights - Democracy » FROM MILITARY INTELLIGENCE SOURCES: THE TRUE REASONS BEHIND THE KIDNAPPING AND INCARCERATION OF MISS JACKIE UMUHOZA, AS SHE SURVIVES EXECUTION.

FROM MILITARY INTELLIGENCE SOURCES: THE TRUE REASONS BEHIND THE KIDNAPPING AND INCARCERATION OF MISS JACKIE UMUHOZA, AS SHE SURVIVES EXECUTION.

Under the satanic system ruling the potato enclave (Rwanda), there is a terminology used by criminal Paul Kagame known as “crossing the redline.”

According to my sources within criminal Paul Kagame’s intelligence apparatus, Jackie Umuhoza who has been under assassin Brig Gen Dan Munyuza’s surveillance since the end of 2017 crossed the redline. And Brig Gen Dan Munyuza who has deep seated hatred against Jackie Umuhoza’s father – Bishop Deo Nyirigira, who lives in Uganda got the opportunity to kidnap, incarcerate and torture Miss Jack Umuhoza to present, under the evil pretext of crossing the redline.

After years of assassin Dan Munyuza failing to get Bishop Deo Nyirigira, the easiest option was to go after his children who were working in Rwanda. By 2017, assassin Dan Munyuza had turned a personal grudge and personalised it into a political issue. Brig Gen Dan Munyuza, through the powers given to him by his office had managed to tag Bishop Deo Nyirigira to RNC through fabricated evidences, thus giving him the rights to go after his daughters living in Rwanda who had nothing to do with politics.

Chronological events on the persecution of Bishop Deo Nyirigira’s daughters can be found in the link.  https://rpfgakwerere.org/2019/11/30/flashback-how-assassin-dan-munyuza-has-persecuted-children-of-bishop-deo-nyirigira/

According to very reliable sources within criminal Paul Kagame’s intelligence services that are familiar with this case, Miss Jackie Umuhoza was supposed to have been eliminated on 27th November 19, but Dan Munyuza changed his mind at the last minute.

The assassination of Miss Jackie Umuhoza would have followed the recent DMI elimination modus operandi of kidnapping, torture, elimination and dumping the body. A source within Criminal Paul Kagame’s intelligence services notes, “Dan had approved the elimination of Jackie, and it would have been similar to that one faced by Anselme. Dan wanted to send a Christmas gift to Nzee Deo, God knows why he changed his mind.”

Anselme Mutuyimana was the spokesperson of the United Democratic Forces of Rwanda (FDU-Inkingi), an opposition coalition, who was assassinated in March 19 and his dead body found in Gishwati National Forest.

For almost two weeks, Miss Jackie Umuhoza has been incarcerated, under either psychological or physical torture in a safe house managed by assassin Brig Gen Dan Munyuza.

True reasons why Miss Jackie Umuhoza was kidnapped to the point of nearly being eliminated; while the persecuted sisters weren’t touched on 27th Nov 19.

Innocent people are being killed on daily basis for merely having relatives in the opposition or having friends in the opposition. Like many innocent Rwandans, Miss Jackie Umuhoza naively failed to understand several redlines set by the Satanic system.

Since 2017, Miss Jackie Umuhoza and her sisters, Lilian Nyirigira and Axelle Umutesi have been under assassin Brig Gen Dan Munyuza’s close surveillance. And despite all types of persecution vented upon them, Miss Jackie Umuhoza continued acting as a citizen under a western democracy, being friendly to everyone without being cautious and taking care.

According to my military and police intelligence sources who are close to her file; Miss Jackie Umuhoza made two fatal mistakes which provided an opportunity for assassin Brig Gen Dan Munyuza to kidnap, torture and incarcerate the daughter of a person he had always wished dead:

All Rwanda’s know how criminal Paul Kagame and his family personally hate and dislike to the core the Rwigara family. Since the assassination of Mzee Assinapol Rwigara, anyone who has tried to come close to this family has met death through brutal elimination and the list is long starting with Mzee Bertin Makuza, CSP Gashagaza Hubert, Mwiseneza Jean Paul…etc.

It should be noted that the Rwigara family are under direct surveillance by intelligence team from the presidential guard Brigade. And Miss Jackie Umuhoza being in open friendship with Rwigara family was crossing the redline set by criminal Paul Kagame.

Since march 19, intelligence surveillance teams took enough surveillance photos as evidence of proof, according to reliable sources, criminal Paul Kagame is well briefed about the frienship of Miss Jackie Umuhoza and Rwigara family.

This friendship was one of the reasons seized by assassin Brig Gen Dan Munyuza to convince his paranoia boss – criminal Paul Kagame for the approval to kidnap and incarcerate Miss Jackie Umuhoza.

While laughing at Dan Munyuza circus, an intelligence source noted, “imagine Dan included in his briefing notes to Afande Mukubwa that Assinapol’s son will be marrying Deo’s daughter next year. Dan Munyuza based this analysis on intercepted communications.” The intelligence source further notes, “obviously there is no marriage, its the usual Dan spicing up intelligence information for Afande to react. Dan turned a mere frienship into a relationship.”

Since the assassination of Mzee Assinapol Rwigara, his residential house has always been tapped/bugged for communication frequencies by presidential guard operatives.

Its only in the potato enclave (Rwanda) and North Korea were a mere tweet can lead to your elimination. As noted above, Miss Jackie Umuhoza naively thought she was living in a western democracy were freedom of speech and expression are guaranteed; she failed to realise that a mere tweet would guarantee her a one way ticket to the graveyard. Especially a comment praising people or country that criminal Paul Kagame detest to the core.

On 9th October 19, President Museveni’s son, Lt Gen Muhoozi Kainerugaba, who is a Senior Presidential Advisor in charge of Special Operations, Tweeted: “Uganda is strong. I never used to believe it but Almighty God has made me a believer. This is God’s country. Whoever dares will be crushed to dust…”

Like any innocent people who responded to Gen Muhoozi’s tweet, and Miss Jackie Umuhoza was among. She commented with a tweet “Happy Independence Day Uganda. A home where everyone feels at peace and free. May the good Lord continue to bless my country.”

On 17th September 19, while everyone was wishing president Museveni a happy birthday, Miss Jackie Umuhoza commented on a birthday tweet made by Lt Gen Muhoozi Kainerugaba on behalf of his father – President Museveni by describing Museveni as the “best African president I know.” What naive Miss Jackie Umuhoza didn’t know, was that DMI and its boss – criminal Paul Kagame are obsessed with social media and are on it 24/7. 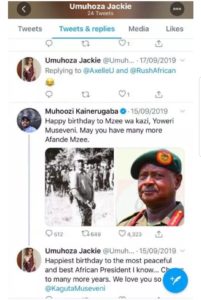 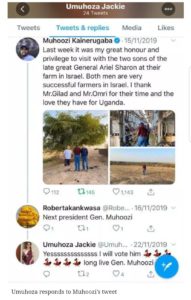 According to reliable intelligence sources; Gen Dan Munyuza used these tweets and Miss Jackie Umuhoza’s friendship with Rwigara family to present a fabricated case against her to criminal Paul Kagame who in turn approved her kidnapping, torture and incarceration up to now.

Currently, Miss Jackie Umuhoza is still incincarcerated and under either psychological or physical torture in a safe house managed by assassin Brig Gen Dan Munyuza.