In the potato enclave ruled by criminal Paul Kagame; kidnapping, incarceration, torture and assassinations are regime policies. This is a satanic regime which has normalised human rights atrocities among its oppressed and enslaved citizens. 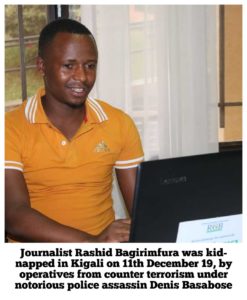 Journalist Rashid Bugirimfura is the managing editor and owner of rwandanziza.rw news outlet. Since his kidnapping, family members and friends have gone to different police stations asking if they have him in their custody, police denied of detaining him, instead encouraging the family to file missing person form.

Previous DICTATOR PAUL KAGAME, A TERRORIST WITHOUT BORDERS:
Next THE MEETING ON THE IMPLEMENTATION OF LUANDA MoU ENDS IN KAMPALA WITHOUT AN AGREEABLE COMMUNIQUE