Breaking News
Home » East Africa » WHO WILL BE BURUNDI’S RULING PARTY PRESIDENTIAL FLAG BEARER IN 2020 PRESIDENTIAL ELECTIONS? AS MINISTER ALAIN GUILLAUME BUNYONI IS PROMOTED WITH THE HIGHEST RANK IN POLICE.

WHO WILL BE BURUNDI’S RULING PARTY PRESIDENTIAL FLAG BEARER IN 2020 PRESIDENTIAL ELECTIONS? AS MINISTER ALAIN GUILLAUME BUNYONI IS PROMOTED WITH THE HIGHEST RANK IN POLICE. 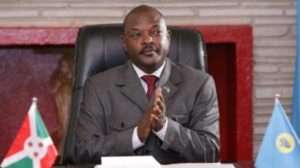 Security Minister Alain Guillaume Bunyoni has been one of the dozens who have been taunted as President Peter Nkurunziza’s replacement as flag bearer of the ruling party, CNDD FDD.

However, on 31st December 19, Alain Guillaume Bunyoni was promoted with the highest police rank, Burundi follows the french military or police ranking system. Minister Alain Guillaume Bunyoni was promoted from CPC (Commissaire de Police Chef) to a CPG (Commissaire de Police Général) which is equivalent to a four star General in the army.

Burundian constitution doesn’t allow serving security personnel to stand for the highest office – the presidency. The promotion of Alain Guillaume Bunyoni within Burundi’s police makes him unlikely candidate for 2020 presidential elections unless he resigns from the police force or asks for retirement, and this retirement granted. 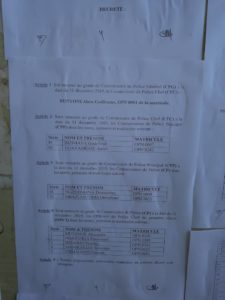 Back to my initial question, who will be the ruling party, CNDD – FDD presidential flag bearer in 2020 presidential elections?