Breaking News
Home » Views From Readers » HOW PRESIDENT PAUL KAGAME SECURED THE GOVERNMENT OF ANGOLA IN HIS CORNER AGAINST PRESIDENT MUSEVENI:

HOW PRESIDENT PAUL KAGAME SECURED THE GOVERNMENT OF ANGOLA IN HIS CORNER AGAINST PRESIDENT MUSEVENI:

Is Angola’s Minister of External Relations doing the bidding for President Paul Kagame in Rwanda-Uganda talks?

The announcement by Angola’s Minister of External Relations that Angola was willing to mediate in the Uganda-Rwanda conflict took a significant number of political analysts by surprise. First, there is no significant socio-economic or political connection between Angola and Uganda or Rwanda. Second, Uganda and Rwanda are members of the East African Community. Logically, the East Africa Community should mediate in any conflict between or among East African countries. Third, Angola is tens of thousands of miles away from Uganda and Rwanda. Conducting negotiation between Rwanda and Uganda from Angola imposes unnecessary economic costs. Fourth, Angola claimed that it’s interested in Uganda-Rwanda conflict because of what they called “Pan-African spirit”. The “Pan-African” ground for Angola’s interest in Uganda-Rwanda conflict is improbable. 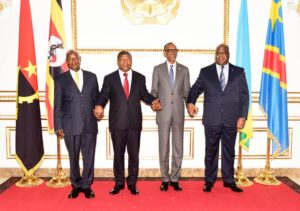 The United Nations Force Intervention Brigade that smoked President Paul Kagame’s troops out of DR Congo’s mines in 2012 was comprised of troops from South African Development Community (SADC) countries; South Africa, Tanzania, and Malawi. President Paul Kagame’s defeat by United Nations Force Intervention Brigade in DRC taught him one important lesson if he was to continue destabilizing and plunder DRC. Mr. Paul Kagame needed a strong SADC country with a relatively weak government which he could manipulate. Angola fit this description.

In 2016, Mota Engil Engenharia e Construcao Africa (Mota-Engil), a Portuguese company in which Manuel Vicente (then Vice President of Angola), allegedly owns substantial shares, was offered a contract to construct a brand-new airport in Rwanda, Bugesera Airport. The same company was offered a contract to manage Bugesera Airport for up to 40 years. Thus the vice president of Angola, Manuel Vincente, became Kagame’s business partner.

Kagame believed that Vicente would become the President of Angola, after José Eduardo dos Santos, but Vicente did not succeed Dos Santos. The new government of Angola sent Vicente to jail. When President Kagame learnt that Vicente’s political career came to a sudden end and he was no longer an asset, Mr. Paul Kagame kicked Monta-Engil out of the Bugesera Airport construction deal. However, before Mr. Manuel Vicente’s political career went down the tubes, Mr. Manuel Vicente and President Paul Kagame had established different business companies in Angola and Rwanda, including pre-cast concrete factories. Angola’s Minister of External Relations, Mr. Manuel Domingos Augusto, who is in charge of Uganda-Rwanda mediation, is allegedly a shareholder in President Paul Kagame’s pre-cast concrete factories in Rwanda and Angola.

Previous ONE OF THE CLEANEST MILITARY OFFICER IN UGANDA, GEN BENON BIRARO SUCCUMBS TO COLON CANCER.
Next SINGER – KIZITO MIHIGO ARRESTED WHILE TRYING TO ESCAPE FROM AN OPEN PRISON CALLED – RWANDA, WHICH IS UNDER A SATANIC REGIME.