Sometimes, I seat back and wonder how a person in normal sense would address Kagamist militias as Generals. How do you become inept enough to award cowards, slow thinkers, killers, assassins, liars, betrayers of the cause, hypocrites…etc, the rank of a general? In 2012, criminal Paul Kagame told his house boy generals at Camp Kigali (Kigali military barracks) that, “Some of you go around whispering about your hate towards me, but always remember, I made you what you are and I can always withdraw those ranks from you.” 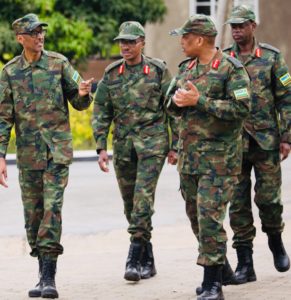 To criminal Kagame, ranks are merely borrowed to his house boy generals. The criminal ruler sees these generals as a batch of brainless hoodlum that he uses like toilet papers to clean his skinny ass.

In this case, criminal Paul Kagame is right. These are the generals that he built, gave them ranks as a token of thank you for collaborating with him to betray their fellow comrades and Rwandans in general. All these generals that you’re seeing around cowering their middle tails in front of criminal Paul Kagame, where once his escorts. These are cowards who used to stay at RPA headquarter, especially in Mulindi 1 and 2, planning how to eliminate their comrades while the rest were involved in high intensity fighting against Habyarimana’s forces.

For those who don’t know, during the Rwanda Patriotic Army (RPA) struggles, the headquarter was divided in three section, Mulindi 1 was where Kagame used to have his tactical banker in case he was around and other senior cadres were based here. Mulindi 2 was DMI and training wing, this was the capital of death, it was a butchery and the first causalities were Tutsis being killed by those they thought are brothers – fellow Tutsis.

Francophone intellectuals were deleted from here, young boys from Francophone Countries i.e Burundi, DR Congo and Rwanda were brutally eliminated for merely forgetting a stupid code or if they didn’t know/trace your family very well. There are certain codes that each new recruit would get from the area/point of departure and these where only given to boys from Francophone countries who came to join the struggle. During the long smuggling journeys, some would forget those codes.

When they arrive at the training wing centre – Mulindi 2, during screening they would be asked their codes, for those who didn’t remember theirs, grave yard was a destiny and they would brutally be killed by use of a short hoe (agapfuni).

Mulindi 3 was the operational centre; where the minds behind the war strategy stationed. Unfortunately, these great military strategists and minds were eliminated one by one at the orders of criminal Paul Kagame with the help of his brutal dogs who were stationed in Mulindi 2 –DMI. We all know what happened to Col Steven Ndugute, the brain behind the war. At the end of 1992, when the ranking committee that included senior RPF carders was planning to award ranks, all those in attendance had agreed to award Major Steven Ndugute the rank of a Major General, a rank that they had just awarded Paul Kagame.

Criminal Paul Kagame was against this idea, suggesting that if they gave the then major Steven Ndugute the rank of a Major General, other comrades would also lament, the criminal ruler citing Vedaste Kayitare would also ask why he wasn’t given a Major General Rank.

A compromise was reached that the rank of Colonel was a high bench mark for all COs except Paul Kagame who was awarded a Major General despite spending most of his time in Kampala at Kale Kayihura’s house making love and babies to his wife, the watery Jeannette Gasana Kagame.

During the RPA struggle, criminal Paul Kagame would only appear in a war zone when he knew that some foreign journalists are visiting, he totally craved for any type of photo opportunity from foreign journalists. His love for publicity and being imaged didn’t start yesterday, they are far seated behaviours.

All the Commanding officers that led the war, after handing the country to criminal Paul Kagame, with the exceptional of the brainless and illiterate Fred Ibingira, the rest are either assassinated or side-lined (gatebe). These great military strategists were so naïve and this naivety gave them a one way ticket to the grave yard, while the rest are living a life of paupers in Rwanda. As criminal Paul Kagame successfully eliminated these gallant officers, he started promoting his escorts and his killing dogs that were stationed in Mulindi 2.

For intellectual underpinning, the majority of officers eliminated or side-lined where Tutsis from Banyiginya sub-clan. Criminal Paul Kagame’s well planned but systematic elimination against Abanyiginya especially within the military started way back in the 1990s during the RPA/RPF struggle, the genocide that is methodically continuing up to present.

Previous PLEASE TAKE TIME TO WATCH THE VIDEO AND LISTEN TO THE MESSAGE:
Next RWANDA’S SPONSORED CENSURE MOTION AGAINST GEN ELLY TUMWIINE LED BY HON EMBWA TEKAMWA HAS SUCCESSFULLY BEEN DEFEATED IN PARLIAMENT