Evidently, Jack Kayonga is some kind of a magician. General Paul Kagame has just sent him back to the US$500 million Crystal Ventures Limited (CVL), the business arm of the ruling party, Rwanda Patriotic Front (RPF). Kayonga has been running the Agaciro Development Fund (ADF) since 2016. ADF is the government sovereign fund which Rwandan newspapers have been boasting that it is currently valued at Rwf200 billion or US$215 million. Prior to heading CVL and ADF, Kayonga used to run Rwanda Development Bank, another government entity. In other words, the appointing authority – Kagame – keeps shuttling Kayonga from RPF business to government business and back to RPF business.

In normal countries, mixing government and private businesses as Kagame does at free will is fundamentally corrupt. And in Kagame’s Rwanda, doing the work Kayonga is doing is deadly. Two of Kayonga’s predecessors are dead. One is in prison. One is in exile. One simply disappeared. 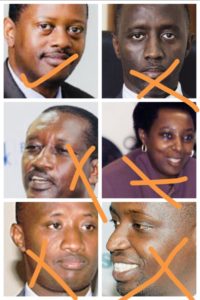 The only person who has run Kagame’s government and private entities and not only survived but thrives is Jack Kayonga. Kayonga is some kind of magician. Pray for Kayonga, and stay tuned.