Yesterday, Sunday, April 5, 2020, criminal Paul Kagame instructed his new director of cabinet in the presidency, Urujeni Feza Bakuramutsa to brief the artificial prime minister – Eduard Ngirente on category of officials who will not receive their April salaries due to economic consequences of Covid – 19.

Urejeni Feza Bakuramutsa informed Eduard Ngirente on directives which have been instructed by criminal Paul Kagame. And the main directive was for senior regime officials to forfeit their April monthly salaries.

Those that criminal Paul Kagame has instructed not to be paid their April monthly salaries, and these salaries be allocated to social protection initiatives:

Within two weeks of lockdown, potato enclave’s (Rwanda) economy has totally collapsed needing IMF bailout loan. For over two decades, through doctored data, the satanic regime has always bragged of annual GDP averaging between 8 – 10%. For the real Singapore or Malaysia, it merely took them less than a decade of annual GDP averaging 5 – 8% for their economies to turn from Agrarian and fishery economy into service, manufacturing and high tech economy.

Within ten years of GDP growth between 5 – 8%, Singapore and Malaysia turned from beggars to donors. However, the potato enclave (Rwanda), on paper has registered 8 – 10% per year of GDP growth for the past 20+ years, but they are still beggars and half of the enclave’s annual budget still coming from donors. Everything uttered by criminal Paul Kagame is fake, poisonous, evil, demonic, lies and fabrications. 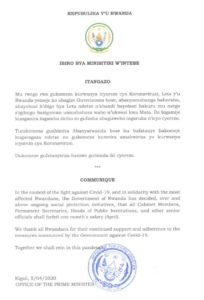