ALGERIAN NEWS OUTLET – EL WAHAM: “RWANDA, A FROG WHO WANTS TO BECOME AS BIG AS AN OX.”

INTERPRETATION BY Rpf GAKWERERE OF AN ARTICLE WRITTEN IN FRENCH BY AN ALGERIAN NEWS OUTLET – EL WAHAM.

Rwanda is this small country, which like “the Frog wants to be as big as an Ox;” Through it’s President, Dictator Paul Kagame. we always hear here and there about Rwanda in good times and in its worst moments.

From sources in Kigali, which is yet to be reliably confirmed, Moustapha Ould Limam Chafi would have already received a diplomatic passport from the hands of the Rwandan President, who is very interested in the affairs of Western Sahara. This action delighted the King of Morocco and upset Algeria and Mauritania.

Countries like Mali, Niger, Nigeria and Cameroon which are regularly attacked by AQIM terrorist organisation are very worried to see the presence of Moustapha Ould Limam Chafi in Kigali among Rwandan delegation that received the Amir of Qatar. These countries would have demanded an explanation from Paul Kagame about his proximity to Moustapha Ould Limam Chafi a well known sponsor of terrorism in Sahel region.

For those who have trouble locating Rwanda, it is a small country in Central Africa that is about the size of the Wilaya Laghouat (about 26 000km). The 2019/2020 budget is € 2.6 billion euros, of which 40% is financed by external donors. This is the equivalent of the budget adopted in 2019 to finance our Ministry of Health in Algeria!

For comparison, the daughter of the former Angolan President Dos Santos, Isabelle Dos Santos is richer than Rwanda, his fortune is estimated at 3 billion €. Paul Kagame knows how to sell something, genocide. Genocide is an instrument of ruthless repression against his opponents.

While Paul Kagame has not lost any of his family and his accused of being the trigger of this tragedy. With corrupt cash, Paul Kagame knows how to use his Western networks to present himself as an example of African success. Paradoxically, 5% of the population takes over 90% of the country’s meager wealth, and 60% of the population lives in misery. Some call Rwanda a new apartheid country!

By dint of inflating Rwanda and Paul Kagame who stands as a teacher of “Doing business,” soon the lies will explode in the true sense of the term. At the same time, Rwanda is sponsoring Arsenal team with a £ 40 million three years contract. Moreover by learning this news, British taxpayers were shocked, and rightly so, that this poor country which survives on huge subsidies from the United Kingdom is returning millions to an incredibly rich London club. When the beggar helps the rich. This is Rwanda of Paul Kagame.

In the photo below, On a working visit to Rwanda, Sheikh Tamim bin Hamad Al Thani was photographed shaking hands with Mauritanian businessman Moustapha Ould Limam al-Chafi. A move that is scandalous because the man is accused of financing terrorist groups in the Sahel.

Currently, criminal Paul Kagame’s terrorism outreach stretches around the world. It’s a matter of time before his former western allies declare him as a sponsor of terrorism. Currently, in Rwanda, sheikh Moussa Fazil Harerimana is heading a Kagamist project of creating Islamic terrorist cells in the greatlakes region. 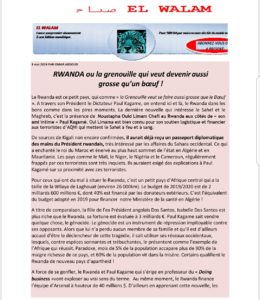 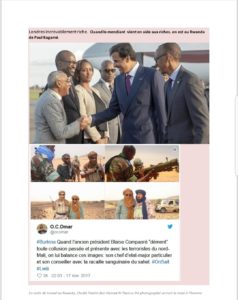