THE SONG IS A PAINFUL REMINDER OF WHAT INNOCENT BANYAMULENGE ARE GOING THROUGH AT THE HANDS OF CRIMINAL PAUL KAGAME, AND HIS FULLY SPONSORED REBEL OUTFITS OF RED TABARA AND MAI MAI YAKUTUMBA. 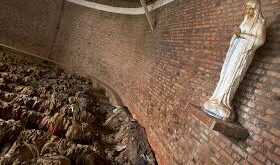 To those who are interested in Geopolitics, you can watch and listen to the interview below, which was held Yesterday, on 17th May 21, in Paris, France. Criminal Paul Kagame is in Paris, France, where his attending a on the Paris Summit on Sudan.

Listen careful at how criminal Paul Kagame is eating his tongue, the 57Kg Skinny geezer is totally clueless and a typical serial liar.

May be this one isn’t Criminal Paul Kagame but his ghost, as neo conservative Hutu extremist ideologue – Thomas Nahimana keeps telling oppressed, enslaved, starving and unemployed Rwandans that the serial assassin died in April 2020.

Thomas Nahimana, who is a self claimed President of “Rwanda government in Diaspora,” has of recently been telling oppressed and enslaved Rwandans that the Kagame they have started seeing moving around, isn’t the real Paul Kagame, but a look alike wearing facial mask, but the real Kagame died last year.

For me, my worry with this neo conservative Hutu extremist isn’t about announcing the death of Criminal Paul Kagame, if he wants he can announce serial killer’s death every hour, 24/7. My worries are on his extremist hate speeches and his acidic views of hating to the core anyone who doesn’t look like him or anyone with a different background to his.

As noted in my various posts, last year – 2020, criminal Paul Kagame was facing health challenges that forced him to take a medical break for almost a year. Up to now, his on medication for two types of chronicle diseases.