This is a 2nd time that Burundi’s singer Kidum real names Jean-Pierre Nimbona has been refused to perform in Rwanda. Kidum was supposed to be performing on 27th September 19 in a Jazz junction concert.

According to reliable sources within Rwanda’s police, decisions to refuse singer Kidum (real names Jean-Pierre Nimbona) from performing in Rwanda came from assassin Brig Gen Dan Munyuza with the influence from anti president Peter Nkurunziza’s operatives of Red Tabara who live in Rwanda.

Brig Gen Dan Munyuza is a deputy on Burundi desk, a military desk meant to oversee criminal Paul Kagame’s aggression against president Peter Nkurunziza of Burundi. Members of this deadly desk which is led by treacherous assassin Gen James Kabarebe aren’t happy with singer Kidum especially for not supporting the 2015 coup d’etat program, and rushing to hold a well attended concert in Burundi after the failed coup d’etat, a coup d’etat which was sponsored by the satanic system ruling the enclave – Rwanda.

According to my source within DMI, figures within DMI’s Burundi desk most especially assassin Brig Gen Dan Munyuza, they weren’t happy with away Kidum real names Jean-Pierre Nimbona handed himself during the failed coup d’etat and periods after the coup d’etat. Kidum preached calmness, unity and reconciliation after the failed coup d’etat of 2015, while Kigali wanted turmoil and bloodshed on the streets of Bujumbura.

What is bizarre about the Kidum situation, criminal Paul Kagame wasn’t told about it. All different sources within the satanic system have confirmed that criminal Paul Kagame has no clue about this case. A source notes, ” president is stressed with other issues, he has other burning issues like a collapsing economy and the rise of RNC to even have time to think about a mere musician. Ayo matiku nayaba Dan.” 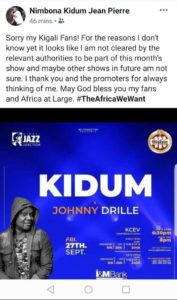 Previous USA IMPOSES SANCTIONS ON DOUBLE AGENT KALE KAYIHURA.
Next Prof Charles Kambanda’s analysis in regard to US sanctions imposed against Gen Kale Kayihura and his family.