Andrew Mwenda is a very ruthless and unethical journalist unhappy with the success of Ugandan security organs in as far as helping to make the operation of Rwandan agents very difficult.

As an agent of Rwanda’s dreaded DMI accused of committing atrocities both in Rwanda and in the region against the countries critics and opposition, he cannot be happy with the man (Col Kaka) who is accredited for helping to dismantle Rwanda’s spy network in Uganda and helping to protect the life of Ugandans.

To double agent Andrew Mwenda, Rwanda’s kidnappings, tortures, incarceration, assassinations and totalitarianism are something to applaud, praise and worth defending.

As a hired mercenary who pauses as a supporter of President Museveni is here to attack and discredit those personnel that Rwanda’s DMI doesn’t want, for example Col Kaka Bagyenda and ISO the reason he is still protecting the evil rein of double agent Kale Kayihura and Kale Kayihura himself.

He is on record for stating that president Museveni has mismanaged relations with Kigali and that this is why Rwanda closed its common border with Uganda.
He went on and asserted that, “the culprit in this conflict is Museveni and not Rwanda’s Paul Kagame.”

He is on Dr. Emmanule Ndahiro’s pay-roll, the man who foresees ‘selling Kagame’s image”.
Mwenda was blindfolded by the money he was making when he was in The Monitor. It was compulsory that time, for each government office in Rwanda to buy Monitor every day.

Mwenda sold his professional conscience for this money. Yes, he got the money … what better person has he become? Kagame and his Junta spent a lot of tax-payers’ money advertising useless things in the Monitor under Mwenda.

That was a kind of kick-back!! He got that money; Rwandans still will ask Mwenda, what does that blood-socked money mean for him, When he fell out with The Monitor, Mwenda, through Ndahiro secured an order from the President, Kagame, prohibiting all government offices from buying The Monitor. Anybody who violated this order would be jailed!!
Mwenda secured money from the same people, Kagame and Ndahiro, to start his own newspaper called the Independent. He got the money and what better is he now? Mwenda should apologize to the people of Rwanda for sustaining the Dictator.

For feeding the world with information about Kagame and the country (Rwanda) which he knew was absolutely false. Poor Mwenda sold all of him for silver!!!

For your information, the Classified” account from which Mwenda is paid in Kigali is meant for procurement of military hardware only!!
This account is closed for any investigations or auditing. This is where Andrew Mwenda gets his pay cheque.

Secondly, Mwenda betrayed the two countries Uganda and Rwanda. He misrepresented himself to Kagame and Ndahiro that he was the closest person to Uganda’s intelligence and the First Family (M7) and so he had all the intelligence pieces needed from Uganda.

Actually, because of Mwenda’s thirsty for Money, we nearly had a head-on confrontation at our common boarders (Uganda and Rwanda).

Mwenda appealed so much to Kagame’s psyche, of course knowing that Kagame’s education is relatively poor, that he nearly convinced the guy that the only alternative was to fight Museveni. In the meantime, Mwenda was getting his Cameras ready to get “breaking news’ and sell his then Monitor. Mwenda contributed close to 60% of the tension that there was between Uganda and Rwanda.Mwenda nearly ended Uganda and Rwanda into an unfortunate war. Netters, it took Kagame’s handlers lots of efforts to convince him that the war was not necessary.

Unfortunately, Kagame trusted Mwenda’s “intelligence network” than his!!! Owing to Mwenda’s irresponsible reporting and thirst for money, millions of our people in Uganda and Rwanda were going to die!!! Shame and shame to this Mwenda. 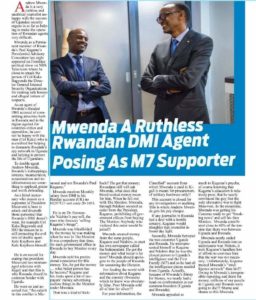