Breaking News
Home » East Africa » THE CORPORAL’S INFO ON WHAT TRANSPIRED IN GOMA, AS UGANDA AND BURUNDI REFUSED TO SIGN KIGALI’S ORCHESTRATED MoU.

THE CORPORAL’S INFO ON WHAT TRANSPIRED IN GOMA, AS UGANDA AND BURUNDI REFUSED TO SIGN KIGALI’S ORCHESTRATED MoU.

As noted in my previous posts, on 24/10/19, in Goma, DR Congo, there was a two day meeting which brought together military leaders from Tanzania, Burundi, Rwanda and representatives from the United Nations Organization Stabilization Mission in the Democratic Republic of the Congo (MONUSCO). This meeting was a follow up to a similar meeting which was held in the same City of Goma in September 13 and 14, 2019. 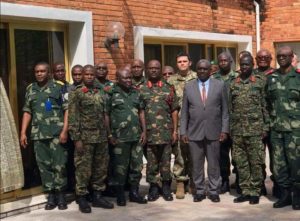 According to reliable sources from Bujumbura and Kampala, the Memorandum of Understanding wasn’t signed because Burundi and Uganda insisted on supporting DR Congo with technical support rather than ground troops, noting, “DR Congo doesn’t lack military man power or logistics.”

Uganda and Burundi preferred assisting The Armed Forces of the Democratic Republic of the Congo (FRDC) with technical and advisory support to defeat these various rebel groups rather than deploy ground troops in DR Congo. While the Tshisekedi – Kagame plan was for DR Congo to invite and allow forces from Rwanda, Burundi and Uganda inside DR Congo to jointly carry out military operations against various rebel and Mai Mai groups fighting in Eastern DR Congo.

For Uganda and Burundi, they had different approaches, and their approaches were based on past experiences when their respective military forces operated inside DR Congo along side criminal Paul Kagame’s militia army – Rwanda Defence Forces, then known as Rwanda Patriotic Army.

Another example is that of Rassemblement Congolais pour la Démocratie-Goma, known as RCD-Goma. In 1998, Mzee Desire Kabila removed treacherous assassin Gen James Kabarebe as the head of his young army and forced Rwanda’s forces out of DR Congo, only for Criminal Paul Kagame to resend them back to DR Congo under a rebel umbrella of Rassemblement Congolais pour la Démocratie-Goma, known as RCD-Goma. And this time around, Burundi and Uganda came to aid of Rwanda at the time when criminal Paul Kagame’s militia forces of Rwanda Defence Forces (then was still known as Rwanda Patriotic Army); were being decimated by Angolan, Zimbabwean and Namibian forces in different frontlines in Katanga and Kasai provinces.

The just concluded Goma meeting of regional military leaders, came at the back of criminal Paul Kagame’s notorious terrorism behaviours in the greatlakes region and his policies of regime change in both Burundi and Uganda.

When the corporal asked military sources in both Bujumbura and Kampala as to why they have been attending these meetings yet they don’t trust Rwanda, they both noted that it was not Rwanda that invited them, but DR Congo’s chief of staff and it’s ministry of defence that invited them to attend these meetings, and they attended to honour DR Congo. But they were shocked to find out that all key points of discussion had the whole mark of Rwanda.

For example, a military source in Kampala told the corporal that during the first meeting held on September 13 and 14, 2019; Burundi’s military delegation bluntly asked DR Congo’s chief of staff – Gen Celestin Mbala Munsense the number of Rwandan forces already in DR Congo. Shockingly, Gen Celestin murmured while telling delegates that it will be a discussion for another meeting when looking at troop numbers to be allowed in the Country. And during this last meeting, 24 – 25 October 2019, this topic on the number of Rwandan forces already in DR Congo was avoided. The military source noting, “this was a dubious deal planned and orchestrated in Kigali but being presented to us by James Kabarebe’s man, Gen Celestin Mbala Munsense. It was a trap.”

Corporal’s sources in Kampala further noted that, “this time around Burundian delegation was even tougher on its questions.” For example, they told Rwandans on their faces that, issues aren’t with the rebels but their sponsors. They started reading accusations after accusations against Rwanda and its sponsorship to various anti Nkurunziza rebel movements.

The Burundian team told those that attended that, everything happening in DR Congo or the greatlakes  region has its source in one way or another in Kigali, pointing out that everyone in the room knows this. A military contact in Bujumbura agreed with this version from Kampala on what transpired on 24 – 25 October 2019, Goma meeting. Bujumbura source further noted that, “there was mistrust and the deal was packaged under Kigali lies. Insecurity issues in the region are caused by Kigali, not those rebels or Mai Mai agents.”

“Just Imagine, while we were talking in Goma, Rwanda’s sponsored and trained rebels of Red Tabara had attacked our country. And these rebels that have entered Burundi have Rwanda special forces operatives embedded with them,” a military source to from Bujumbura noted.

However, the meeting concluded on 25th October 2019, agreeing for further talks at the end of November – early December 2019 on a date to be communicated by DR Congo’s ministry of defence.

1) Rwanda Forces already has a military Division (10000 plus men) in DR Congo, then why does it insist on Burundi and Uganda joining in their Human Rights atrocities and economic plundering in DR Congo?

2) Rwanda Forces are already deployed in strategic areas around Eastern DR Congo, why the need to invite Burundi and Uganda in joint military operations inside DR Congo?

3) Rwanda defence forces has been deploying in DR Congo since March 2019, why now decide that Uganda and Burundi should be part of their plans? Remember, with approval of DR Congo’s accidental president – Felix Tshisekedi, Rwanda forces are operating in Eastern DR Congo in the provinces of South Kivu, North Kivu and Ituri region while wearing DR Congo military uniforms.