IN MEMORY OF AFANDE MOHAMMED KIRUMIRA

Late Afande Mohammad Kirumira, “if correcting the image of police and protecting Ugandans means some of us must be sacrificed, my home is in Bulenga Wakiso district.I will not shift, my burial place is in Mpambire Mpigi, I am ready to die and I will never keep quiet.”

Double agent Kale Kayihura and his mafia network within the Uganda police would never want Afande Mohammed Kirumira to testify against them, and they went for an option they know best – elimination with the logistical support of J3/DMI under the directive of treacherous assassin Gen James Kabarebe with approval of criminal Paul Kagame.

The satanic system ruling the potato enclave – Rwanda had to protect their assets – double agent Kale Kayihura and his mafia network at all cost. 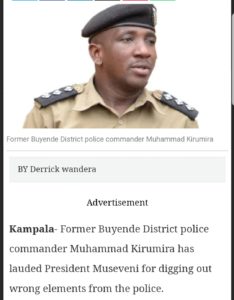