It takes an inept person to believe the statement below, especially coming from a bloodthirsty satanic system ruling the enclave. The time flame in the statement is a pure lie, according to different sources, gun shots were heard after 5:00 AM, not 3:00 AM as the junta police noted.

Just last week, the same force patrolling the border between Rwanda and Uganda executed four Rwandans who were returning from Uganda, and the potato enclave’s cold blooded police force released a similar statement referring them as smugglers and acting violently.

The shoot on sight orders were given by criminal Paul Kagame himself way back in May, 2019, to stop starving and impoverished Rwandans from travelling to Uganda. Only allowing his ruling elites who can afford airfares and DMI agents to travel to Uganda. 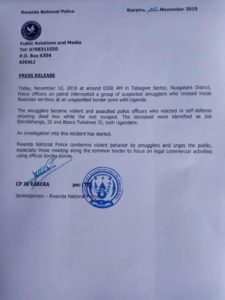 Previous BYE BYE TO THE SAJYA MEN, AS CRIMINAL PAUL KAGAME LOOKS TO BURUNDI BORN BOYS FOR HIS TOTALITARIAN SURVIVAL.
Next Prof Charles Kambanda: KAGAME does not know that espionage and spying are crimes in all countries.