On Thursday, 13 February 20, I posted on the arrest of gospel singer Kizito Mihigo, link below. 👇👇👇

Last night, after midnight, a team led notorious assassin CP Egide Ruzigamanzi, head of crime intelligence and assassin CP Dennis Basabose, head  of counter terrorism, went to a safe house in Kibagabaga where Gospel Singer Kizito was being incarcerated since his arrest on 13 February 20.

They spent hours questioning him, and the topics were based on why he was freeing from Rwanda and people he has been talking too since he was released from prison on 15 September 18.

After interrogation and forcing him to hand in his phone password, before ordering his elimination, CP Egide Ruzigamanzi told Kizito Mihigo, that, “last time we warned and told you to never imprison you again, but give you a harsher punishment of death. Then CP Agide Ruzigamanzi ordered his men bamufanyiye, Gospel Singer Kizito Mihigo was then strangled and his remains were taken in the wee hours of early this morning to Remera police station.

Below, a statement full of lies from criminal Paul Kagame’s bloodthirsty police force. 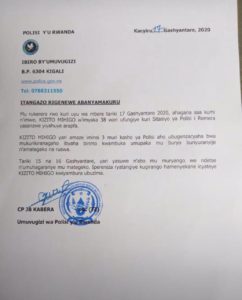 MORE INFO TO BE SHARED AS THE COME..

RIP KIZITO MIHIGO, WITHOUT ANY SINGLE DOUBT JUSTICE WILL CATCH UP WITH CRIMINAL PAUL KAGAME AND HIS ASSASSINS.

Previous DICTATOR KAGAME NOW MAKES RECKLESS CLAIMS, WITH DEMANDS AFTER DEMANDS IN ORDER FOR HIM TO OPEN THE BORDER
Next FOUR KEY NOTORIOUS ASSASSINS IN THE ARREST, INCARCERATION, PSYCHOLOGICAL TORTURE, INTERROGATION AND ELIMINATION OF GOSPEL SINGER KIZITO MIHIGO.