2) Lawyer Donat Mutunzi, eliminated on 22nd April 18, like Kizito Mihigo, he was eliminated by an assassin team led by Egide Ruzigamanzi and CP Denis Basabose. 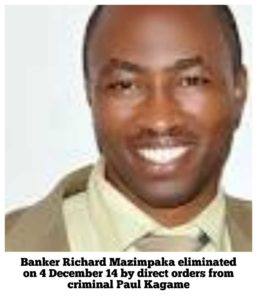 All the above, including others, were brutally eliminated at direct orders of criminal Paul Kagame, and the satanic regime turned around to say they committed suicide. These were people at the pick of their lives with no single cause to make them suicidal.