DMI surveillance around the Rwigara Residence has been increased since Diane Rwigara wrote an open letter to Pilato, a letter which has featured in several prominent international media houses. 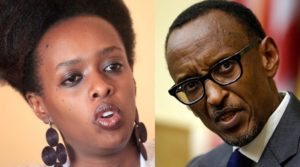 According to my source within Pilato’s DMI terror group, of recently, the Rwigaras had relaxed their security consciousness appearing in restaurants, and for Diane Rwigara, DMI has many times tracked her to restaurants around Kiyovu not far from their residence.

According to this DMI source, the Rwigaras need to avoid restaurants and be cautious with their security because Pilato is totally in horrible moods and deeply stressed up. DMI source notes, “the man has millions of problems, and Diane’s letter is a further injury to a wounded animal. And a wounded animal is always dangerous.”

This DMI source further informed me how Pilato’s ambassadors have spent two months without receiving their salaries and remunerations. The source notes, “diplomats are only receiving maintenance/upkeep allowances, they have gone for two months without receiving their actual salaries. Things aren’t good at all, and this Diane is coming up with her letter to cause more injuries to Afande.”