CRIMINAL PAUL KAGAME KNEELS TO UGANDA AND KENYA, AS BURUNDI CLOSE THE BORDER TO RWANDA REGISTERED TRUCKS AND GOODS FROM RWANDA.

On June 30, 2013, criminal Paul Kagame outrightly threatened to hit president Kikwete of Tanzania, a president of a sovereign country. He followed his speech by ordering importers and exporters to stop using the port of Dar es salaam and use the port of Mombasa. Those who disobeyed his directives where punished with draconian taxation regime. This policy of emphasising to use Mombasa port changed when Dr John Joseph Pombe Magufuli became the president of Tanzania in 2015.

In 2015, after the failed coup d’etat in Burundi of which criminal Paul Kagame was the chief planner, sponsor and orchestrator; he tried border closure mechanism to destroy the economy of Burundi.

In 2019, it was the turn of Uganda, criminal Paul Kagame ordered the border closure with Uganda, and the border is still closed up to present.

What Rwanda didn’t say, are which trucks and goods not allowed to enter in Burundi. Burundi has only refused entry and clearance of cargo trucks transporting goods from Rwanda and trucks with Rwanda registered number plates.

Goods from other countries are being allowed and cleared to enter, as long the goods/cargo aren’t being transported by trucks with Rwanda’s registration number plates. 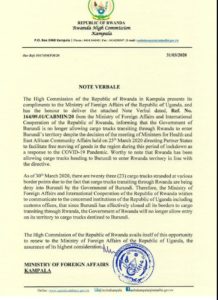 In 2019, the deranged dictactor – criminal Paul Kagame noted, “I can never kneel or beg from anyone, that isn’t me.”

Officials from Uganda’s ministry of foreign affairs were totally shocked when they received a crying letter from Rwanda complaining on how Burundi has closed all their borders with Rwanda. As an official from Uganda’s ministry of foreign affairs noted to me, “sometimes I think those ruling Rwanda are under demonic possession. You need to be in our negotiations to appreciate how they are lacking in all aspects.”

CORPORAL THANKS THE GOVERNMENT OF BURUNDI FOR ADMINISTERING CRIMINAL PAUL KAGAME HIS OWN DOSE OF MEDICINE.