If anyone dares to question any of the elements of the events that led to genocide, how it evolved, the numbers involved, the heroes that ended it, that Doubting Thomas is finished. That is what Nduhungirehe did – he dared touch Kagame’s industry and brand. The former minister dared to go outside the Kagame’s parameters.

Nduhungirehe publicly on Twitter mourned Hutu opposition leaders such as Prime Minister Agathe Uwilingiyimana who were murdered on April 7, 1994. Nduhungirehe added that he knew the murdered families and that he knew some of them “personally and grew up with their children.”

Nduhungirehe was immediately ambushed by Kagame’s social media army that reminded Nduhungirehe that “Today is not the day to remember politicians.” That was the end of Nduhungirehe career as minister in Kagame’s Rwanda.

Nduhungirehe seems to have forgotten that he worked for a totalitarian dictatorship that operates on the principle of blind and total submission to the powers that be. There is no room in Rwanda to deviate however slightly from the official line even in thoughts let alone spoken words. You are not even allowed to mourn murdered friends. 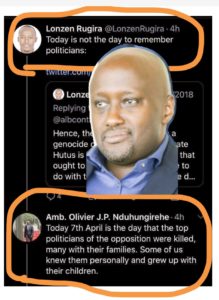