Since it’s establishment in 2002, criminal Paul Kagame’s regime has been sustaining and keeping afloat Rwandair. In 2016, as Rwanda’s minister of finance and economic planning, Clever Gatete told Criminal Paul Kagame’s buffoon Parliamentarians how the satanic regime will keep sustaining Rwandair until it starts generating enough funds to fully finance its operations. Clever Gatete noted, “we cannot allow a national treasure and pride to collapse”

Clever Gatete had appeared before buffoon Parliamentarians to explain the raising costs of sustaining Rwandair. For example, in 2015, the satanic regime injected US$56.2 Million into RwandAir. In 2016, the regime injected US$53.8 Million. And from 2017 to 2019, the satanic regime has been injecting more than US$ 47 Million per year to sustain the madman’s loss making project.

Now, the bankrupted potato enclave (Rwanda) is struggling to keep on bank rolling this madman’s project. Rwandair was part of the axis used by criminal Paul Kagame to refer the impoverished potato enclave as the African Singapore. Currently, the potato enclave (Rwanda) which has a far lesser Geographical area than South Kivu, is sinking in foreign debt worth US$5.6 Billion, and when you include internal debts, the margins have surpassed the US$6 Billion mark.

The deranged dictator has mortgaged the impoverished potato enclave (Rwanda), run the African Singapore metaphor on credit card and now, the economic miracle which was based on Public Relations lies, stunts and data manipulations is being exposed and disintegrating.

During the Covid19 lockdown, after merely one week of lockdown, criminal Paul Kagame went running to IMF and European Union for financial aid, the Potato enclave received US$104 Millions and US$53 Million respectively of loans.

The document below, illustrates the last nail into the coffin of Rwandair. Workers will not be paid, contracts have been suspended, wages cut and redundancies implemented. 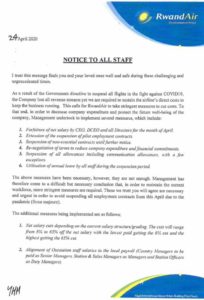 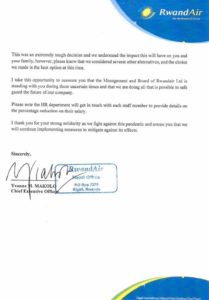