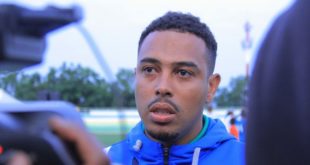 HUSSEIN HABIMANA EXPLAINING CHALLENGES HE FACED AT THE HANDS OF FERWAFA MAFIAS. 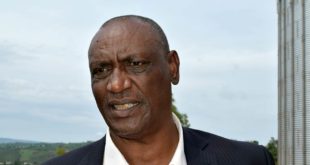 WITH SCIENTIFIC ELECTIONS IN UGANDA, WILL CRIMINAL PAUL KAGAME STILL SPONSOR HIS PROXIES?

On 8th July 20, Rwanda’s ambassador to Morocco, Sheikh Habimana Saleh told oppressed and enslaved Rwandans: “the God that we pray must be thanked very much, because we are being led by a good and forgiving shepherd who can resurrect even the dead.” Imana dusenga ihimbazwe cyane kuko tuyobowe n’umwungeri mwiza wimpuwe asubiza umwuka mumirambo. 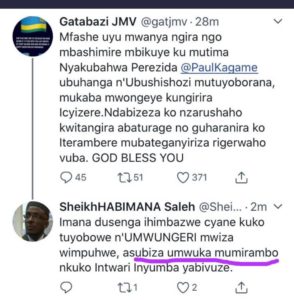 In short, this inept sycophant told oppressed and enslaved Rwandans that, criminal Paul Kagame has “godly” powers to resurrect the dead.

In 2001, Maj Gen Jack Nziza anointed his informer – sheikh Habimana Saleh as the mufti of the Muslim community in Rwanda, a position he served up to 2011.

Due to his excellent work of spying and controlling the Muslim community in Rwanda, Maj Gen Jack Nziza recommended Sheikh Saleh Habimana’s names for a political post, and in 2013, he was appointed as an RPF member of Parliament. Deadly intelligence operative Sheikh Habimana Saleh stayed in the buffoon Parliament until March 2015, when criminal Paul Kagame appointed him as Rwanda’s ambassador to Cairo, Egypt.

Last year, July 2019, sheikh Habimana Saleh was moved from Egypt to Morocco. He is currently Rwanda’s ambassador to Rabat, Morocco.

In trying to get criminal Paul Kagame’s ear through idiotic sycophancy, in July 2017, during Rwanda’s fraudulent presidential election, Intelligence operative Sheikh Habimana Saleh referred criminal Paul Kagame as ,”a saint who was given to Rwanda by God.” “God listened to our cries and prayers, and he gave a saint to lead us,” said Sheikh Saleh.

Intelligence operative Sheikh Habimana Saleh is also an expert in retweeting whatever twitter message that praises criminal Paul Kagame. One can never count how many times he praises the brutal dictator in a week. To survive in criminal Paul Kagame’s satanic government, you have to constantly praise him.